Increasing strength, endurance and ROM on the softball field. 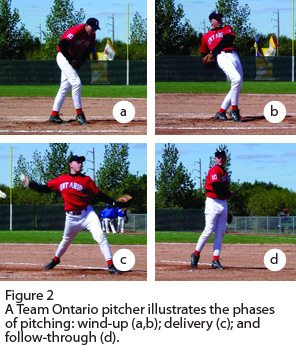 Invited to assist the Ontario Amateur Softball Association with the health care of its junior men’s team in preparation for the 2005 Canada Summer Games, I started with the team in May 2004 at a selection camp held in Oshawa, Ontario.

In November of that year, a pitchers/catchers camp was held in Stratford, Ontario, hosted by chiropractor Dr. Jeffrey Tuling, who I worked with to assess each athlete by way of functional screens.  The camp also provided exercise prescription and pitching instruction.  That instruction was coordinated by Mr. Doug Neil, pitching coach for the Canadian national junior men’s program, which was then preparing for the International Softball Federation’s World Softball Championships to be held in Prince Edward Island in July 2005.

In December 2004, at a training camp in Oshawa, there were additional functional screens, sport-specific testing, exercise prescription and a session of vision training with Dr. John Granda, a sports optometrist from Ottawa.

Final selection of the team took place in May of the next year and, after a few preparatory tournaments, it was off to Regina for the Canada Summer Games.  After a slow start there, the team (Figure 1) rallied for a thrilling extra-innings win over team British Columbia, 7-6, in the gold medal game.

For those who have either played baseball or softball, or been involved as a health-care coordinator, phrases such as “the power line,” “stepping in the bucket” and “squish the bug” are well understood.  To others, these terms are quite foreign.  The power line is an imaginary line that extends from the centre of the pitcher’s rubber straight to the back of home plate.  Stepping in the bucket refers to the batter’s position after the stride foot has been planted during the swing; it suggests that the stride is “open,” meaning that the lead stride leg has landed more towards third base, in the case of a right-handed hitter, or towards first base if the hitter is left-handed.  Finally, squish the bug refers to the pivoting motion of the back leg, as the batter swings the ball, a motion that accelerates bat speed and creates maximum power in anticipation of making solid contact with the ball.

Historically, the literature surrounding softball has been limited, perhaps due to the assumption that the mechanics of the windmill pitching motion does not put significant stress on the upper limb complex.  This traditional view was challenged and recently refuted by researchers from Louisiana, who have demonstrated that the stresses observed during the windmill pitch are similar to those observed during the overhand baseball pitch.(1)

THE PITCHING MOTION
The pitching motion can be divided into four phases: the wind-up, stride, delivery and follow-through.(2) (See Figure 2.)  Functionally, the windmill pitch demands adequate range of motion – from the foot, ascending the kinetic chain into the hip, spine, shoulder, elbow, wrist and fingers.  A common deficit observed in pitchers, as in other athletes, is what I view as “sagittal blockage.” The first metatarsophalangeal joint may be reduced into extension, termed “functional hallux limitus.” The ankle may also have reduced dorsiflexion capacity, due to reduced flexibility of the triceps surae musculature, or from arthrokinetic dysfunction of the talocrural joint.  The pelvis-spine junction is often impaired with the lower cross syndrome described by Janda.(3) The shoulder, including the scapulothoracic joint, may lack the ability for full circumduction in the sagittal plane, due to the “sick” scapula described by Burkhart.(4)  The elbow may lack full extension, due to painful locking or snapping, perhaps due to a plica syndrome.

FUNCTIONAL DEFICITS
The next most common error for pitchers is to deviate from the power line defined earlier.  As they stride toward home plate, they plant and fall toward first base, rather than continuing toward home plate.  This results in lost energy, with the possible additional risk of placing the upper limb complex in a vulnerable position.  This is often due to either ankle or hip control insufficiency.  This can be termed “coronal control.”  This phenomenon is also a common dysfunction observed in other athletes, particularly runners and athletes who must land from a jump.  The pelvic musculature is unable to control femoral position.  The hip abductor/ external rotator complexes are often implicated.

Finally, as the pitcher strides toward the plate, tremendous power is generated via rotation of the pelvis in the transverse plane, demanding adequate hip range of motion, strength, power and endurance.

Part of our off-season development program focused on addressing several of these common functional deficits.  Trendelenburg, particularly after the athlete is fatigued(5), single leg squat(6) and Janda functional screens(7) were all testing procedures that were utilized.  The athletes were assessed and prescribed exercises to facilitate range of motion, power and endurance. Particular focus was given to strengthening of gluteus maximus and medius using the following foundational exercises as well as additional progressions: the Westside Technique(8); the McGill “Big Three,” including the “birddog,” “side bridge” and “modified curl-up” for the spine(9); and scapular/rotator cuff exercises by Buchberger(10) were the foundational exercises.

I encourage chiropractors across Canada to find ways to assist amateur athletes to understand how the parts of their body are interdependent, and to offer them successful techniques that will maximize their potential and reduce risk of injury.  The grassroots sports environment is an excellent venue for our involvement.•


Related
Are fast-pitch softball pitchers overdoing it?
A Performance-Enhancing Partnership
Baseball Pitching Performance
Kids who specialize in a single sport more than eight months in a year are more likely to get injured