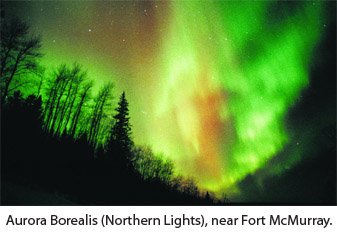 In the Alberta oil economy, no other area personifies the boom like Fort McMurray.  This once small town, with its unprecedented growth over the past five years, is positioned to become the third-largest city in the province.

But there is still only one road for the five-hour drive south to Edmonton.  The scenery consists of trees, trees and more trees.  Driving the first 200 kilometres out of Fort McMurray, the only interruptions are two gas station stops and a few work camps.

Fort McMurray is unique because of the tremendous amount of oil that lies beneath its soil.  This is known as the tar sands, or the oil sands.  The new bounty has fuelled tremendous growth in the area.  Another $12 billion will be spent in tar sand development this year, and over the next decade companies will invest $100 billion in mines and extraction plants.  More than a million barrels of oil are derived each day, and production is projected to reach three million barrels by 2015 and six million by 2030. 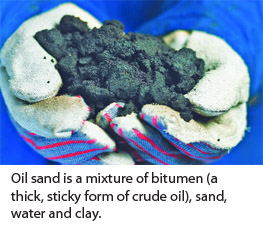 YOUNG AND VIBRANT
The community is young, vibrant and culturally mixed, similar to larger urban centres such as Toronto. There are so many people from all across the country working here.  With around-the-clock production at the oil sands plants, the city works 24/7.  More than 87 per cent of people above the age of 14 reported being in the region’s workforce in 2005.  The infrastructure is busting at the seams and there are help wanted signs everywhere.

Outside the city limits, prepare to meet wilderness.  That wilderness is pristine and the northern lights are spectacular.  Being surrounded by nature greatly adds to the quality of life in Fort McMurray.  It is not unusual for the weather to range from –40 in the winter to the high 30s in the summer.  At times, forest fires have threatened the city.  One such approaching blaze encompassed an area larger than Prince Edward Island before being brought under control.

My wife Cheryl and I are 1993 graduates of the Canadian Memorial Chiropractic College (CMCC), and we have practised in Fort McMurray for 13 years.  When we first informed friends and colleagues of our decision to relocate to Fort McMurray, they told us we were crazy.  They were incredulous that we would move to a place where nearly everyone seemed to be leaving then because the oil industry was downsizing.

After doing locums for a year, we started our own practice on October 4, 1994, three days before our first child was born.  Subsequently, we have seen a lot of changes, not the least of which in our own family, with the recent birth of our fifth child.

As the city has expanded, and as we have grown as chiropractors, so has our office.  From two treatment rooms in the basement of an old building, we have evolved into five treatment rooms with all the bells and whistles in a modern commercial power centre.  With the exception of the hospital, we are the only location where radiological studies of the spine can be performed.  Before the boom we had an impressive traffic flow, now we are open 30 hours a week and are busier than ever.

With the average age of residents being in the early 30s, we treat very few seniors.  Sometimes patients ask if today is baby day, as there can be a lot of babies in our office at one time.  With several children’s tables, we like making the adjustment something very special for our young patients.  Earning fellowships from the International Chiropractic Pediatric Association (ICPA) has helped broaden our skills to develop a thriving family practice. 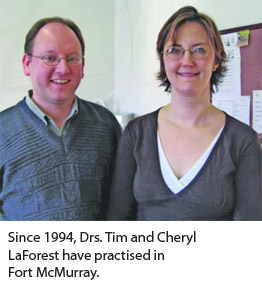 SHIFT WORK TOWN
Fort McMurray is a shift work town and our business hours reflect that.  On two evenings, our doors are open until 9 at night.  In this hectic work environment, patients are very motivated to improve their condition, and may ask to be adjusted more often to get better faster.

We never let the perceived isolation act as a deterrent to ensuring that we equip ourselves with the best training in order to offer our patients the finest available care. We have worked diligently to become proficient in many adjustment techniques. Ours is a full-spectrum chiropractic operation that aims to progress patients to the option of wellness care.

People move in and move out of this partly transitional community.  There are long lines in all service sectors, and heavy traffic to deal with on a daily basis.  Our children’s bus ride is now over an hour each way to school.  The city has already raised our property tax by over 400 per cent and says that over the next five years it will need $1.9 billion to fund health, education, roads and other services.

Our clinic participates in community events.  Last year, we helped raise $6,500 for the hospital foundation. A warm-up exercise program designed by our office was given to a local company in exchange for a $5,000 donation to a charity that helps sick children.  That company, as a result, has experienced nearly a 30 per cent decrease in injuries as a result of the program. On “Valenspine’s Day,” we earmark a portion of our earnings for the soup kitchen or food bank.  Innumerable chiropractic pillows from our clinic have found their way into many silent auctions.