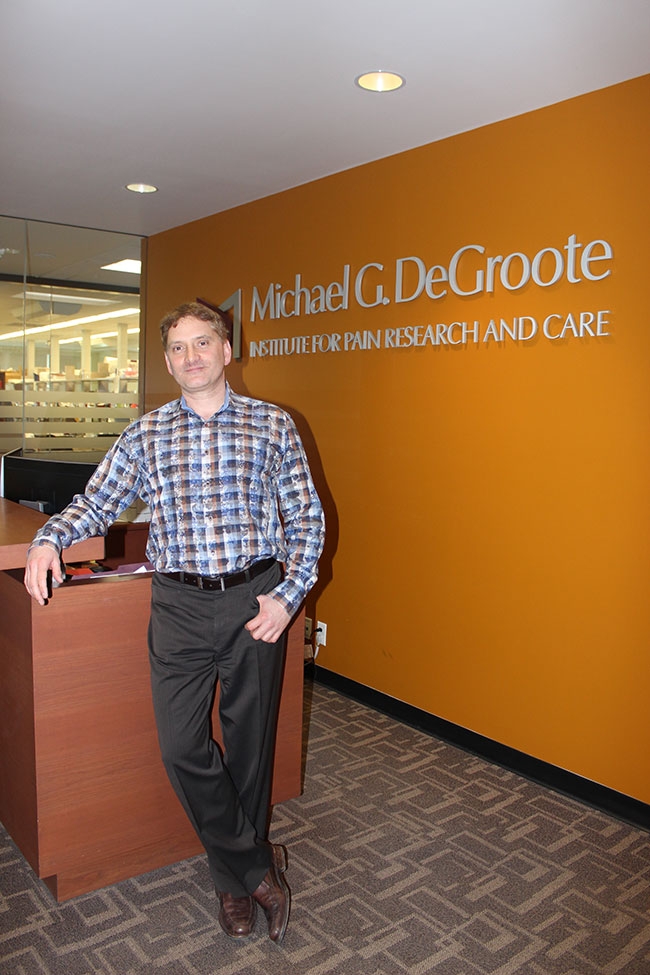 The federal government’s policy shift to decriminalize and legalize recreational marijuana has spurred increased activity in the research community to build evidence around the benefits, as well as the short and long-term effects of cannabis use.

Dr. Jason Busse co-leads one of the country’s leading medicinal cannabis research programs at the Michael G. DeGroote Centre for Medicinal Cannabis Research. Busse is a chiropractor and an associate professor at McMaster University’s Department of Anesthesia Research.

Canadian Chiropractor recently sat down with Busse to talk about his work in medical cannabis research and its impact on patient care and the chiropractic profession.

Canadian Chiropractor: What do you think is driving this current interest in cannabis research – the impending legalization or the quest to find solutions to the opioid crisis?

Jason Busse: It’s absolutely both. There was an interesting editorial in the Journal of the American Medical Association published about a year and a half ago, basically making the point you make which is, now prescribers are under increasing pressure to reduce the reliance on opioids. North America is by leaps and bounds the highest per capita prescriber of opioids in the world. U.S. is number one, Canada is number two. We are far above other countries right now.

It was quite clear to the guideline panel that there was strong evidence to recommend against opioid as first-line therapy. We have somewhere between half a million and a million Canadians using long-term opioid therapy for chronic pain. If you’re going to put some pressure on prescribers to look to alternatives, they need alternatives. So what’s it going to be?

You can either look at providing better access to existing services such as chiropractic or psychotherapy. And you can also look at a potential, promising new agent – and cannabis may be one.

What I am a little worried about is just as there was this incredible excitement about opioids 25 years ago, where people were eager to put it into practice without good supporting evidence, I am concerned a similar thing can happen with cannabis. So we have to find some way to try to not let practice get ahead of the evidence – that’s what we’re trying to do. We are going out there with a cautious message, essentially saying, we’ve heard the wonderful anecdotes, there is some observational data, there are some small trials that have been done that at least suggest more research would be valuable here. But we are not able to make any strong statements to say, “we absolutely know this is a beneficial treatment for these five conditions and the benefits clearly exceed the harms.”  We just don’t know that. Even with studies that we do have, a follow-up tends to be very short.

And people do worry about what are the long-term impacts of cannabis use. Fine, we know the harms after you’ve used it for a week or a month. But what about a year, two years or ten years? These are all areas of great uncertainty that we are going to try and help inform over the next couple of years.

CC: There seems to be this rush for legalization of recreational cannabis from the government’s perspective. Does that concern you?

JB: Oh, absolutely. I think there’s going to be a lot of adjustments. A lot of the policies are going to be quite vague, at least initially. There are a lot of questions out there right now so they are trying to put some sort of framework to it. The business interest is huge. The black market in Canada has been estimated at around $7 billion per year; in Ontario it’s around $2.5 billion per year. It’s not certain how [legalization] is going to unfold, so I do think there is an enormous challenge.

In terms of the legal aspect, prohibition hasn’t worked, and the government is spending a lot of money on law enforcement. Now they are saying, “let’s put the money into standardizing the product, ensuring good education, ensuring better safety around it, and maybe try and take some of the wind out of the sales of the criminal enterprises that are making tremendous profits off this right now.”

When you look at other countries or even states that have legalized other illicit substances or even cannabis, the concern is that there will be a big spike in users. The evidence, so far, does not bear that out. It seems when you’ve decriminalized or legalized cannabis, you get an initial little spike in use, particularly amongst younger people, but overtime it tends to flatten out. People that are already using simply move into the legal stream, as opposed to everyone decides all of a sudden they’re going to become [smokers of] cannabis.

CC: What do we know for certain about cannabis for medical purposes?

JB: I can say that from the work that we are currently doing, there appears to be moderate quality evidence that medicinal cannabis in a range of different forms appears to provide small but important pain relief for people dealing with chronic non-cancer pain. Now when I say small but important, what we found is on average the effect tends to be small. When you focus on average effects, you have to do that with the understanding that not everyone is going to have the same response. So there are probably some patients that are not going to experience any benefit at all and there are some that might get more than an average benefit, and there are some that are going to fall high on the average.

We do know, especially with some formulations out there that do contain higher levels of  THC, there is a trade-off between things like sedation and dizziness. Is it working well enough for them that they are willing to continue using it? So, we do have at least moderate-level evidence of a small but important benefit for pain relief in people with chronic non-cancer pain.

Other areas – like PTSD – people are very interested in it, but there’s not a lot of PTSD studies out there. I know Veterans Affairs actually reimburses for medicinal cannabis and they have thousands of service people that are currently using for PTSD and they are quite interested to know if it works. So we’ve had some discussions with [Veterans Affairs] about what a study can look like to help answer that question. There just isn’t enough good evidence out there to say, “yes” or “no.”

CC: What are the top areas of research around cannabis you think should be the focus right now?

JB: I think we need to better understand the potential benefits for chronic non-cancer pain – and harms – because a lot of individuals dealing with chronic pain do report concurrent use of cannabis. And with all the pressure to get off opioids, I think there’s going to be even more interest in moving in that direction.

Again, I think we need to have a much better understanding about the long-term harms. We really don’t know what to tell people when they say, “I have a chronic condition, my rheumatoid arthritis is not going to get better, so what do I have to understand about being on [cannabis] for 10 years or 20 years?” We don’t know the answers to that yet.

I think we also need to better understand – this is not a pill, this is a plant. This is medieval medicine. There is over a hundred different active cannabinoids in cannabis. What works? Is it the THC? Is it the CBD? Is it the turpines? Is there an entourage effect where you need to get the whole thing? Can you actually just come up with a synthetic derivative like nabilone? Or is that not very effective?

Right now it’s a bit of a Wild West. Even if you look at the trials, everybody is kind of using different things. I think right now with this push, it’s now becoming available as a legitimate therapy. I’ve certainly met with a lot of producers that are really trying to up their game, and they’ve got tight quality control and they have very particular strains and they know that they are getting a consistent product. Now we have to start testing it to see. For example, if someone is using it for chronic pain where they have associated difficulty sleeping, do you want to get them on high CBD during the day so there’s no euphoria? Then at nighttime maybe that dose changes to include more THC to help with sleep.

I mean there’s so much that we don’t know about cannabis. We need to understand what is going to work for people to address their particular condition [without] side effects that are going to make it problematic for them to function.

CC: But cannabis is just part of the solution to such a complex condition such as chronic pain.

JB: It is certainly not going to cure pain. It may be part of a management strategy. Ideally, with chronic non-cancer pain, what we want to do is get people functioning and give them quality of life. It may be that for some people medicinal cannabis is part of their management strategy to accomplish those goals.

CC: Where do chiropractors fit in this new and potentially bigger medical cannabis paradigm?

JB: Patients may come in and ask – because they go on the internet, or they have a friend that has tried it, or they’ve seen something on a news program. I always think it’s helpful for chiropractors, even if they are not providing other forms of therapy. Maybe they’re not doing cognitive behavioural therapy themselves or prescribing cannabis – but if they are aware of the evidence behind these things, then they may be able to help their patients make better decisions in terms of looking into options for themselves.

The more that we learn about chronic pain, it’s unusual that someone pursues a single, isolated therapy. They are usually sort of piecing together a number of components that will work for them. They may find that attending a chiropractor may provide some relief for their pain, and seeing a psychotherapist assists with some of the mood issues they experience as a result of being in chronic pain. Maybe for some of them, they find that adding medicinal cannabis of a certain type and formulation also helps them a little bit, too. It’s often different things work for different people and they put together a series of strategies that allows them to function at a higher level.

Management of chronic pain is difficult and complex, and patients require more time and often multiple interventions. Chiropractors are going to have to get a little bit more comfortable assessing other aspects that are often associated with chronic pain. I think there needs to be more effort done for chiropractors to be part of teams as opposed to working in their particular silo.

Finally, I think it would almost be essential that funding is made available to support that kind of integrated, multidisciplinary care. It’s going to take longer, and ideally that funding will be focused on results.

There’s going to be opportunity for chiropractors to take a role, to maybe expand a little bit of their paradigms in some cases, become integrated with a range of treatment providers and ideally petition funders for reimbursement that supports effective strategies that are moving people forward.

Mari-Len De Guzman is the former editor of Canadian Chiropractor magazine. You can contact her at mdeguzman@annexbusinessmedia.com.
Print this page


Related
What drives patients to use medical marijuana? Mostly chronic pain
Doctors should think twice before prescribing medical marijuana: guideline
Feds announce over $1M in funding for marijuana research
Despite fanfare, medical benefits of marijuana remain experimental for many conditions