Why chiropractors should pay attention to the Aboriginal population. 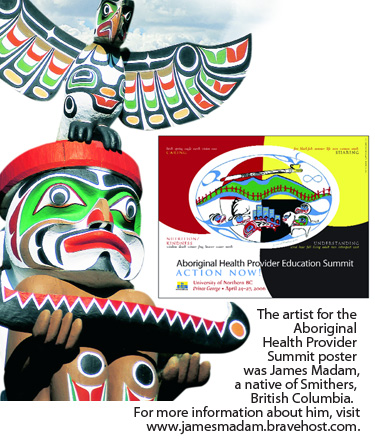 These alarming statistics were part of the reason for a summit that took place in Prince George, British Columbia, earlier this year.

On April 25, on the beautiful campus of the University Of Northern British Columbia, I had the privilege of representing the B.C. Chiropractic Association at the Aboriginal Health Provider Education Summit.  When Dr. Don Nixdorf, the association’s executive director, asked me to attend, he said he thought that the chiropractic profession would benefit by having a presence.  He also said that I would not have to talk; he was wrong.  The summit was set up for small working group discussion and then the group working as a whole to develop an action plan.  No one sat and listened, as we were all encouraged to contribute.

There were three main objectives for the summit:
•     Increase the number of Aboriginal people working in health careers
•     Improve the retention of health-care workers in First Nations, Inuit, and other Aboriginal communities
•     Adapt current health-care education curricula by improving their
cultural relevance

The summit was designed to help produce an action plan to enhance the levels of participation and success for Aboriginal learners in post-secondary education and training in B.C.
The 150 summit participants represented health-care professions, post-secondary educational institutions, the provincial government, and Aboriginal institutions and communities.  This diverse group was ultimately able to come to a consensus on many of the areas of discussion.

EDUCATION AND THE ABORIGINAL COMMUNITY
The Aboriginal population is under-represented in the health-care professions.  Moreover, due to inadequate education, many Aboriginal students cannot qualify for entrance into post-secondary education.  This is partly due to the lower standard of education in smaller rural schools.  When grades are the main criteria for entrance, Aboriginal students are often at a disadvantage.  This is not because they can’t do the work; it is often because they are not given the chance.  One small Aboriginal community began with 32 students but only two graduated from grade 12.

Some more statistics:
• In several years, First Nations students will represent between 25% and 50% of the entire elementary student population in several provinces
and territories
•  Between 1981 and 1996, the proportion of Aboriginal people aged 20 to 29 with a post-secondary degree or diploma increased from 19 to 23%
•  In 1999-2000, the rate of high school graduation for on-reserve First Nations students was only 32.1%
•  Aboriginal students are twice as likely not to complete high school than non-Aboriginals and more than three times less likely to  complete university degrees

As a chiropractor, the most alarming finding for me was that when it comes to health care, most Aboriginals thought only of medical doctors and nurses.  At this summit, the chiropractic profession was only mentioned when I was introduced. Not once was it included there as one of the health-care professions.  Physiotherapy was referred to once or twice, and naturopathy was alluded to once only because one of the Aboriginal speakers has an aunt who is a naturopath.

In B.C., the nursing profession has taken a unique approach by trying to educate younger students about what a nursing career can offer.  Nursing students’ visits to First Nations communities have resulted in an interchange of information and greater understanding.

The chiropractic profession – individual practitioners and our provincial and national associations – must get more proactively involved in Aboriginal health care.  The First Nations community needs to be better informed about how chiropractic fits into the heath-care picture.  Young Aboriginal students should be encouraged to become chiropractors.  There is, after all, a large, rapidly growing Aboriginal population that can benefit from chiropractic.

If we accept this challenge, both the Aboriginal community and the chiropractic profession will benefit in a positive way.•