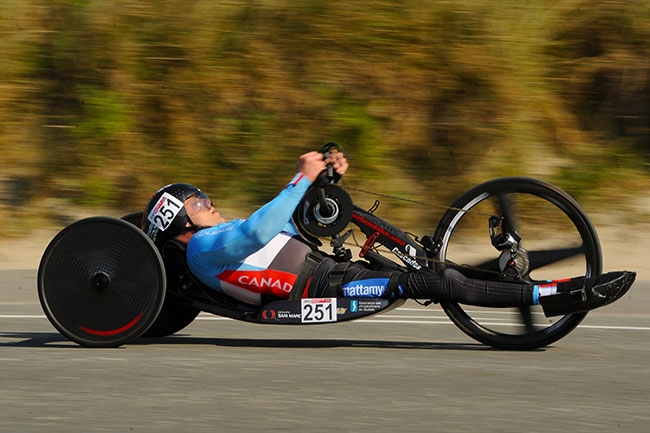 Charles Moreau didn’t lack for chiropractic influences in his life. His dad is a chiropractor, and his uncle was one as well. Growing up with natural health and spine health was part of the fabric of the family’s life growing up, Moreau says, who is the second oldest of seven children.

(Today, the first five children are chiropractors.) “Sport and eating well” were important alongside a focus on the “neuro-musculoskeletal system, by taking care of your spine.” From an early age, Charles saw the positive
effects his dad’s treatments had on patients.

Instead of going into computer science, Moreau made the final decision to go to chiropractic college after receiving his Christmas gift at age 19. He attended the 50th anniversary of the Parker seminars with some of his family members and a few friends, all of whom were in chiropractic college at the time. “It was a life-changing experience and ignited the passion and desire to go into chiropractic,” Moreau says.

Changes in an instant
By January 2008, at age 25, Charles was on the verge of graduating with his chiropractic doctorate when he was in a severe car accident and was paralyzed from the waist down. All of his technical requirements were complete for finishing his degree – there were only final papers and a lab analysis to submit. While he was in rehab after the accident, he was finishing up his schooling, which he says gave him something positive to focus on in an environment that could be bleak.

“Being in rehab is not exactly a positive environment. For three hours a day you’re with different therapists – occupational, physio, psychologist – but for the rest of the day, if you’re not busy doing something, you’re stuck with your thoughts,” Charles says. “You only think about the things you can’t do anymore, so it gets depressing quickly.”

Classmates came to visit a few times every week and brought him notes for classes and assignments from teachers. Finishing the little bit of work that was left to complete his degree kept Moreau busy and feeling constructive. However, there was a moment when he didn’t know if he would be allowed to graduate.

“[My classmates stuck together] and said: if you don’t allow him to graduate, we won’t graduate either – there are ways Charles can practice with his disability.” Having that support from his classmates was emotional for Charles. “I was and still am extremely grateful for them.” He graduated with the rest of his class in April of 2008.

After graduation, Charles didn’t make any significant decisions as to what to do next right away. He had learned and experienced a way to practice, and not having the choice to change that after the accident was hard to consider. It took him two years to be open and look at alternative practicing options. Considering many of his family members were in chiropractic at the time and attending seminars, they kept an eye out for different tools and set-ups Moreau could use to practice. It wasn’t that easy, though. He also had a hard time with the provincial automobile insurance in Quebec, which, since about 2012 has been the main thing holding him back from practising as a chiropractor. Because he was two months away from graduating when the accident happened, the insurers don’t recognize his diploma, and aren’t willing to let him back into the workforce without penalty (half of what he would earn as a chiropractor). At this point, any practicing he does is out of passion – and not to earn a paycheck.

Charles recovered quickly after his accident, and he thinks it’s because he was in good health before it happened. Moreau credits chiropractic with helping him recover faster. “I was getting adjustments since I was born.” The doctors told him in the intensive care unit that the average time in hospital after an accident like his was one month – Moreau went home in 12 days. In rehab, the usual length of time was three months, while Moreau stayed five weeks before heading home.

A brand-new sport
Charles was a triathlete before the accident, and it was getting back to sports that saw him through the challenging time immediately after the crash, he says. It was too difficult to think about his chiropractic life then, but focusing on sport “was the complete opposite,” he says, both physically and psychologically. By July 2008, he was already back in the pool with the support from his former triathlon team. Swimming came first, then the rehab centre lent Moreau a bike to practice on. Adapting to the bike took a little time since different muscles are used compared to the bikes Moreau was used to riding previous to the accident. In winter of 2008/2009, Charles tried the athletic chair, which replaces the running portion of a triathlon. By summer 2009, Charles performed in his first para-triathlon. “I realized I was still in good shape and most importantly still had fun doing it, even if it was in a different way.”

The early success in the sport helped him decide to get back to his old training habits and discipline. He decided to aim high – the world stage and the Paralympics. He participated in para-triathlon until 2012. Moreau then decided to switch his main focus to the bike. Para-triathlon wasn’t a Paralympic sport in 2012, and there was little government funding for it. There’s also more equipment needed in triathlon over cycling, which means a higher cost. Moreau is now a Paralympic cyclist. He trained and made it to the Rio Paralympics in 2016. Moreau says Rio went unexpectedly well, considering that he was starting at the bottom when he first began the circuit. Every race before Rio though, he would shave a few seconds off his time, getting closer and closer to the podium. With hopes of winning one medal in Rio, in the end, Moreau walked away with two bronzes. (They were very close races: He was 0.4 seconds behind second place and 0.8 seconds in front of fourth).

Tokyo 2020
The next big goal is the podium in Tokyo 2020, and Moreau thinks gold is within his reach. Before then, Charles is focusing on the 2019 World Cup and World Championship, as those results are used for Paralympic team selection.  While all amateur athletes have to fight to find funding sources, Paralympic athletes don’t get the same publicity as Olympic athletes do, even after they medal at the games. The bike Charles uses alone costs $20,000, and due to changes in technology that have impacts on performance, it needs to be switched out every two years. At Charles’s website (charlesmoreau.com) people can make one-time donations on his GoFundMe campaign or, if they’re able, they can join his CLUB VIP 2020, where members get exclusive communications from Charles. He shares special projects, helmet testing, and keeps people in the loop of what’s going on in his training. “The goal is for people to feel part of the victory – the path,” says Moreau. His main concentration at the moment is his journey in sport.

Never giving up
With that said, he hasn’t given up the chiropractic path. The legal issues around practising and compensation have slowed him down professionally, he says, but there may be a light at the end of this tunnel. As of 2019, Moreau is pursuing legal advice about how he can still use his professional skills for the good of patients. He’s “looking to get back into practice, but just part-time for now.” He’s recently reactivated his licences and is now in observational mode. With routine exams and ensuring he’s up to date with his knowledge. Time will tell how Charles’s chiropractic journey continues. One thing is for certain: chiropractic is still a big part of his life. Charles gives about eight to ten presentations per year to schools, corporations, and other organizations, and he always talks about the place of chiropractic care in recovery and high-performance sport.

Dilia Narduzzi is a freelance writer in Hamilton, Ontario. She writes about health, food, and agriculture.

[THIS APPEARED IN THE SEPTEMBER 2019 ISSUE OF Canadian Chiropractor]