A look at the results from our annual Chiropractic Trends Survey

Although we can’t by any means extrapolate these survey results from the couple hundred responses we obtained to the entirety of the profession, survey results like these can help facilitate discussion, moving chiropractic forward.

Here’s what we learned from this year’s survey.

Case management and earnings
Just over half (51%) of respondents have been in practice for over 20 years, while those who have practised for less than 10 years was about 16%. The remainder have been practising between 10 and 20 years.

As with other years, about 50% of respondents practice in Ontario, followed closely by British Columbia (21.5%), and Alberta (10.5%). Working in a multidisciplinary clinic with complementary health care providers (RMT, naturopath, etc), was once again the top choice for chiros in Canada, although female chiropractors were more likely than their male counterparts to work in these environments. Males were more likely to work as solo practitioners. Those in their 20s and 30s were also more likely to work in multidisciplinary clinics with other medical practitioners (MDs, physiotherapists) than the older cohort. In general, chiropractors working within clinics with other medical practitioners (MDs) have nearly doubled this year (10% of total responses) compared to previous surveys.

Most in this younger cohort report their net annual earnings in 2018 between $25,000 and $99,999. The majority of this age group spent 21-30 hours in clinical practice, seeing 50-100 patients per week. Chiropractors in their 40s, 50s and 60s were more than twice as likely to work in a solo practice than those younger than 40 years of age. The bulk of this age group reported net annual earnings between $75,000 to $124,999, spending between 21-40 hours per week in clinical practice, and seeing 50-100 patients per week. Earning supplemental income from product sales was the most popular choice among all chiropractors, but those younger than 40 were more likely to have no other supplemental income.

Scope of practice, cannabis education + Biggest challenge
More chiropractors are dismissing the idea of expanding the scope of practice to include limited prescription rights. Here are a few comments:

This year we asked questions concerning the areas of CBD/cannabis, seeing as it has was approved for sale in the country in October of last year. Edibles and drinkables are on track to go on sale in October of this year. (Although it looks like Quebec is opting out.) It seems chiropractors in Canada are interested to learn more about what’s happening with research surrounding cannabis (“it would be helpful to have some education on the subject”), although many commented it shouldn’t be mandatory. But, there’s interest there. As one chiropractor said “It’s our responsibility to know about cannabis just as much as we need to know about pain, anti-inflammatory, and muscle relaxing drugs.”

For the fourth year running, low trust level from the public was once again selected as the biggest challenge to the profession (22%), followed closely by “other” (21%) where DCs listed a variety of gripes. This year, “high cost of running my practice” slid into third-place as the biggest challenge. Some of the gripes listed in the “other” category were also within the answer choices, but this question always elicits additional commentary. Mostly chiros were commenting on the in-fighting and “internal attacks” with the profession. A few said it’s these reasons specifically why there’s a low trust level from the public or medical community and bad PR/public perception. There was a lot of concern as well that the pure MSK focus is a danger to the profession in that the public sees chiropractors as “glorified physiotherapists.” One DC said that for the public, there is a “lack of understanding about how [chiropractors] can help.” 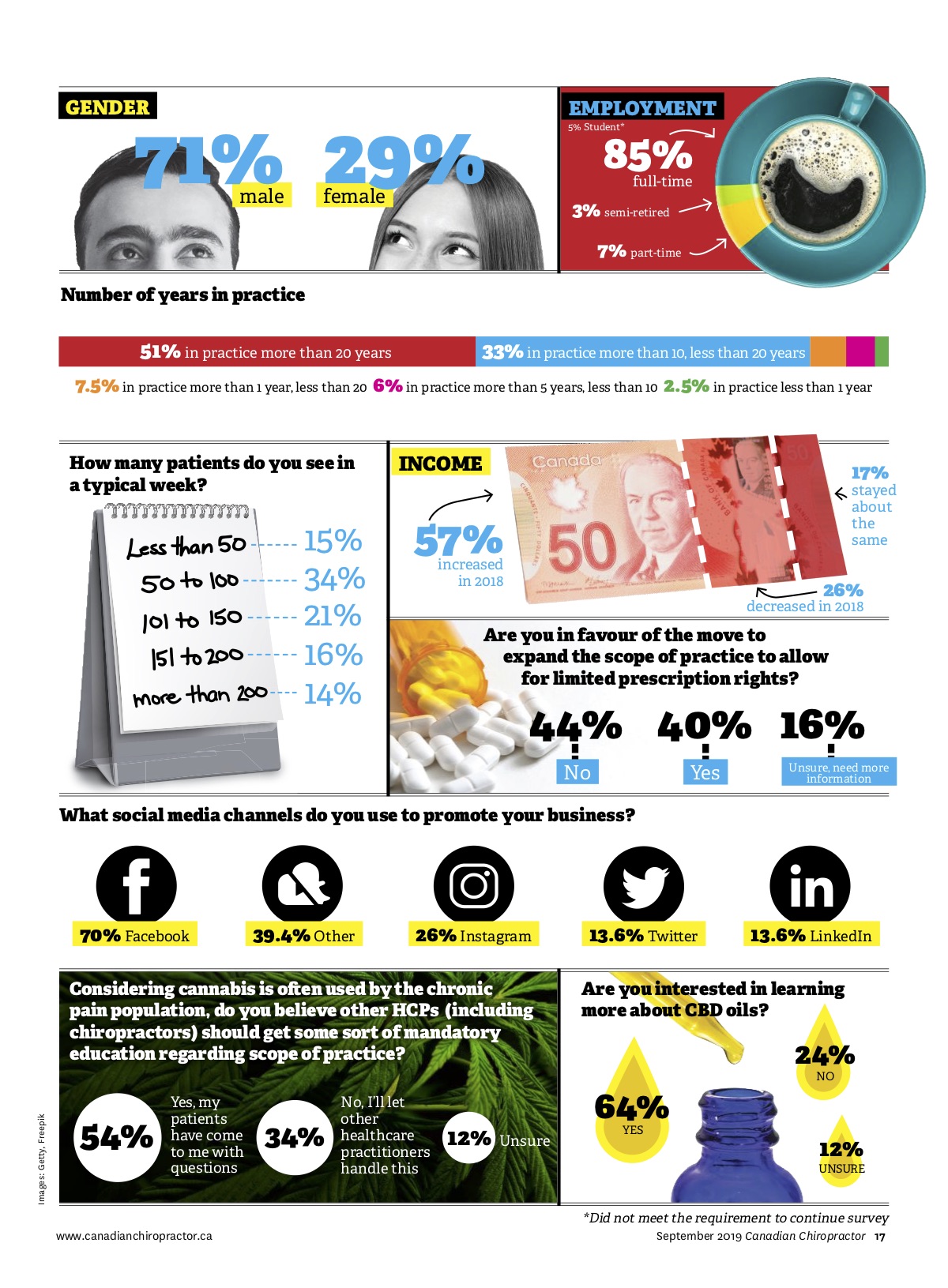 Satisfaction with associations
New this year, Canadian Chiropractor asked a new open-ended question to survey respondents: Do you believe the provincial and national associations are doing enough to support the profession in Canada? Why or why not?