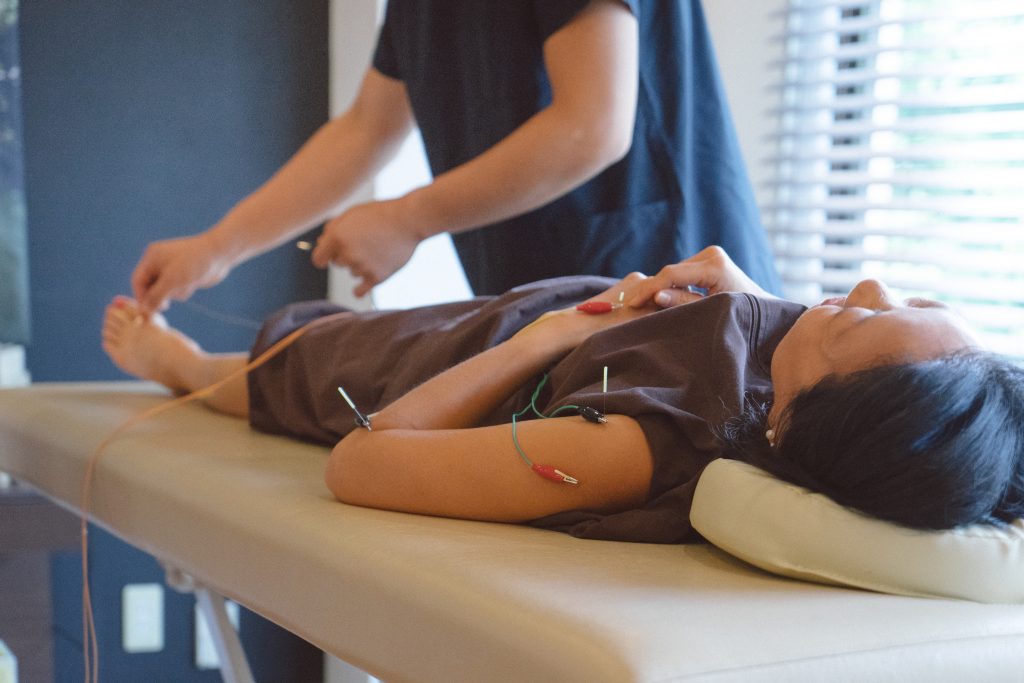 This series on the neurofunctional operating system has looked at the fundamental challenges faced by practitioners dealing with pain with movement disorders in their quest to answer the two main questions surrounding these conditions: what do we treat, and how?

The Percutaneous Functional NeuromodulationTM system (PFNM) is a successful functional neuromodulation technique using fine solid needles and electricity. A science-based technique, PFNM follows the anatomical and functional organization of the peripheral and central nervous systems. The fundamental idea of the system was born out of a simple observation. From a neuroanatomical standpoint, I realized that all therapeutic inputs used in the treatment of pain with movement (such as a manual intervention or the stimulation of nerves with filiform needles and electricity) could be classified into only one of two neuroanatomical categories. Either the input is segmentally related to the problem (e.g. same peripheral nerve territory, same dermatome or myotome, same spinal segment via relevant posterior primari rami, etc.) or it is not. Meaning (in this last case scenario) that the input is “extrasegmental” is relative to the problem. This “eureka” moment immediately laid the foundation for the development of the Percutaneous Functional NeuromodulationTM system.

Sign up to get the latest news and events from Canadian Chiropractor. Our E-newsletter will be sent to you only once per week, on Mondays.

TREATMENT METHODOLOGY
In a functional neuromodulation approach, neurofunctional targets selected to treat a given pain with movement problem could include all the functional and anatomical levels of the nervous system, i.e. the peripheral nerves and their receptor fields, the intercostal nerves, all spinal cord segments (somatic, sympathetic visceral and vascular), and all supraspinal levels of the central nervous system. Obviously, most of these areas, indeed all except the peripheral and the intercostal nerves, are not directly accessible to any “material input” but instead can be reached neurofunctionally by the use of different electrical frequencies (explained elsewhere) and by the specific neuroanatomical approaches: 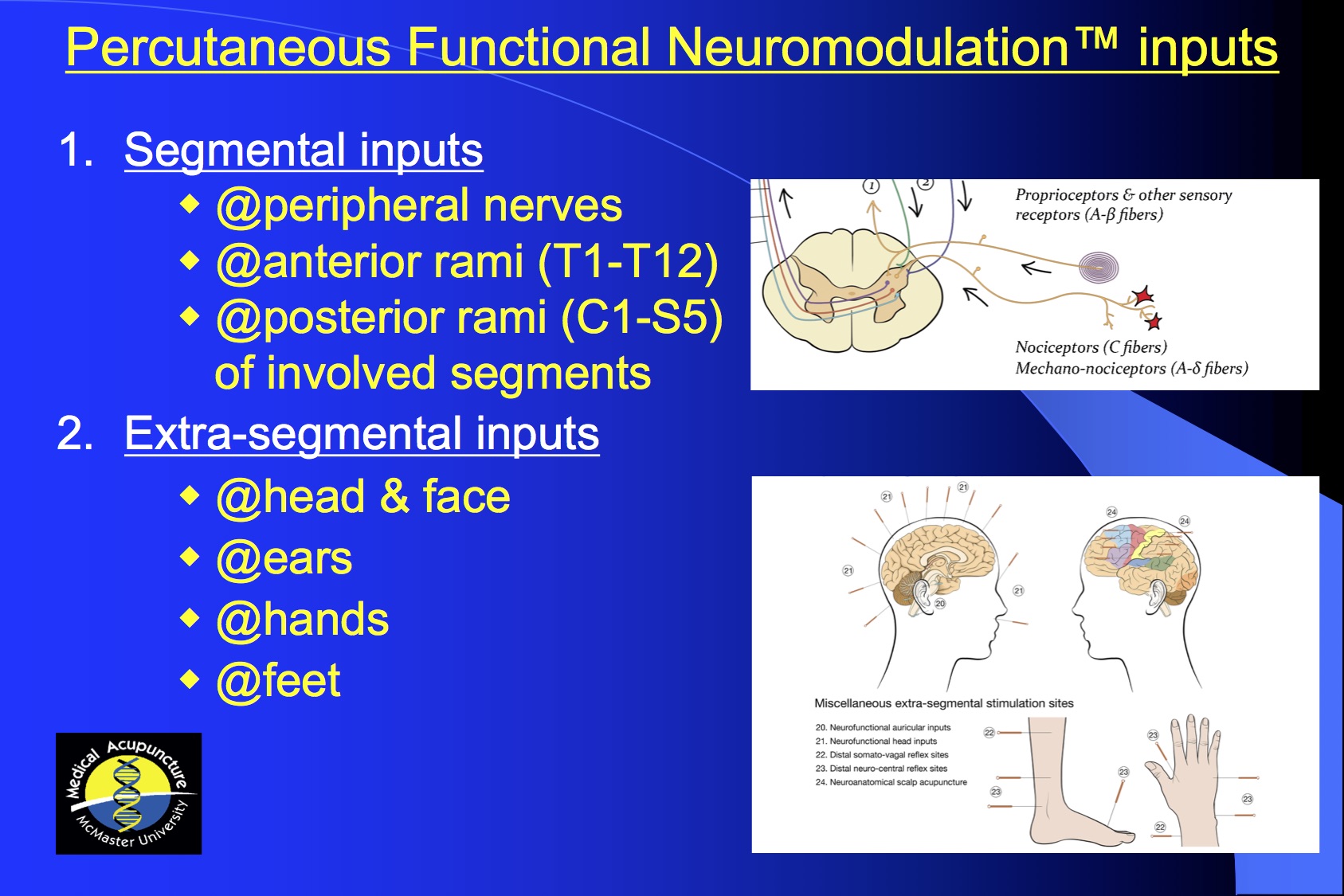 In order to facilitate the development of protocols and a language that was at the same time simple and accurate, specific nomenclature for the PFNM system has been adopted over the years: 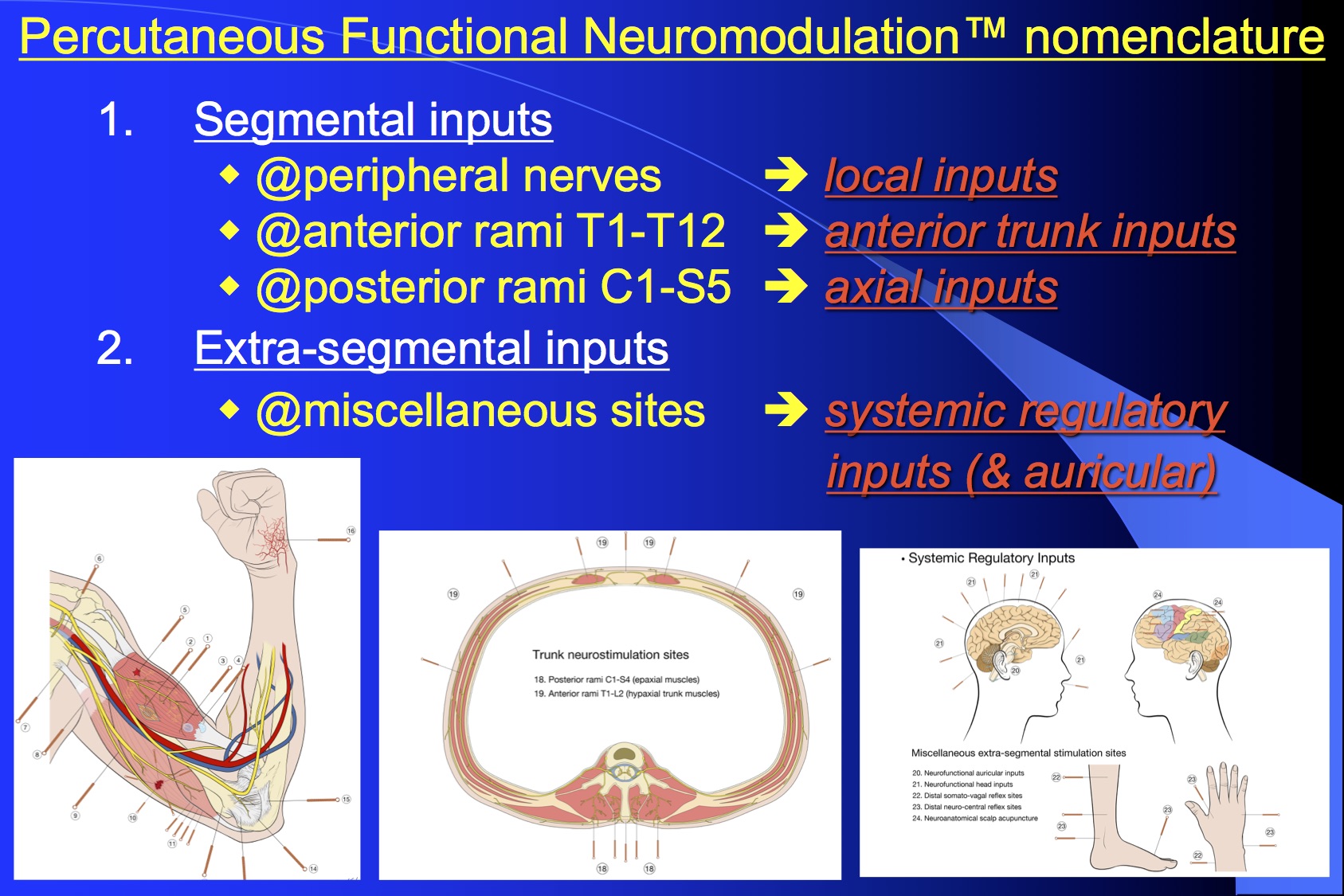 The fundamental key to profit from the system is to use a neurofunctional diagnostic model. To be able to select the best inputs, practitioners need to describe pain with movement disorders neuro-anatomically, indicating whenever possible the peripheral nerves involved (cutaneous and motor), the peripheral segmental neurofunctional subdivisions involved (i.e. dermatome, myotome, sclerotome), the spinal segments involved (both spinal somatic levels and the spinal levels of the preganglionic vascular sympathetic neurons associated to the area), and the involvement (or lack of involvement) of the intercostal nerves territory. In addition, a clinical neuroendocrine evaluation should qualitatively determine the general state of the sympathetic nervous system, adrenal and thyroid functions, digestive system function, and the state of the rest of visceral systems, as well as stress levels, mood, sleep quality, etc.

Before proceeding to select specific inputs, practitioners also need a clear idea of the neurophysiological goals that could be achieved by this functional neuromodulation technique. (See “science-based clinical goals” below.) This explains two things: What neurophysiological and neuromodulatory mechanisms are engaged by the needle stimulation, and what the physiological consequences are of stimulating those mechanisms, like improving perfusion of increasing functional strength. 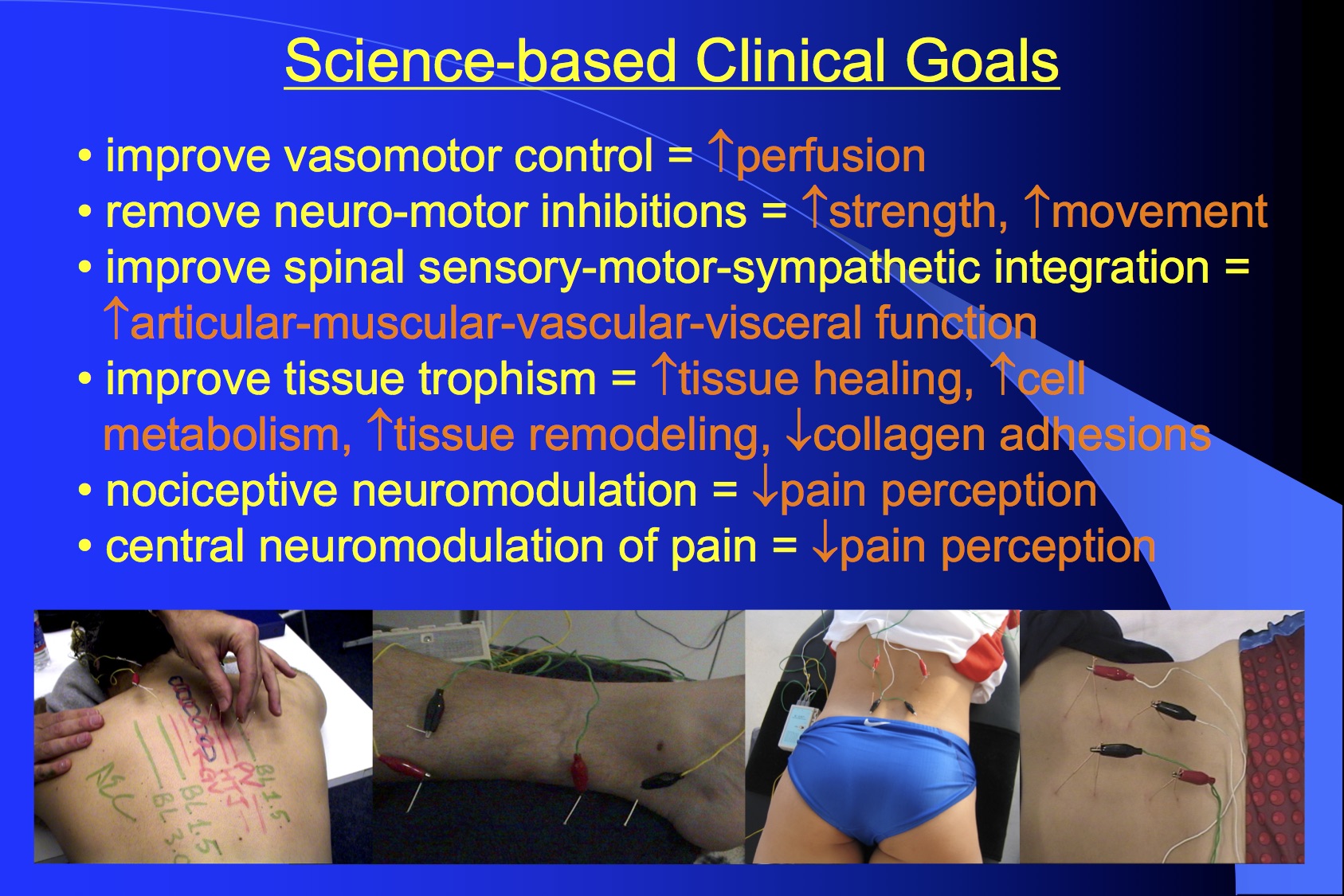 SUMMARY OF NEUROMODULATORY MECHANISMS
Once goals and neurofunctional targets are clear, it’s now possible to select specific inputs from the three main categories available: local, axial and systemic regulatory inputs. Local inputs are by far the ones with broader neuroanatomical choices, as peripheral nerves in the trunk and limbs connect with a multitude of different receptor fields associated to different types of nerve fibres. Stimulation of each of these areas triggers different neuromodulatory responses, all useful to accomplish the different therapeutic goals.

Many local biochemical effects have been measured numerous times by researchers1 using the method of the “microdialysis needle” to sample the tissue around the needle after a local twitch response has been provoked. Research also includes local sympathetic responses by axo-axonic reflexes and the release of nitric oxide.2, 3

Axial inputs are anatomically presented in Figure 1. (See gallery, above.) However, a full neuroanatomical and neurofunctional discussion would need to include the concept of the “back homunculi” as the representation of the projectional areas corresponding to all of the categories of somatic and sympathetic innervation contained in the spinal cord. For instance, vertebral level C4-C5 corresponds to somatic innervation C5, as in this area spinal segments are above the vertebra of the same name, but T4-T5 corresponds to spinal level T4 which is somatically related to the thorax, but is also associated with the level of some of the preganglionic neurons that connect with the postganglionic neurons that innervate the arteries of the head, neck and upper extremity, as well as the sympathetic neurons that provide part of the visceral innervation of the upper levels of the digestive system. Accordingly, all treatments of trunk and limb problems should always include two of these three levels: the somatic and the preganglionic vascular sympathetic.

For many years, neurophysiology of muscle function has demonstrated the existence of segmental reflexes such as reciprocal inhibition or autogenic inhibition, as well as the phenomena of viscero-somatic and somato-visceral reflexes. The spinal segment is a great integrator and modulator of somatosensory information, but also participates in viscero-visceral response. [See D.L., Diehl (1999) “Acupuncture for gastrointestinal and hepatobiliary disorders” The Journal of Alternative and Complementry Medicine for a great summary of visceral effects of somatic inputs, both axial and distal.] Also, different segmental mechanisms of nociceptive neuromodulation have been described in response to inputs at different electrical frequencies in the same segment.4

Finally, the systemic regulatory inputs presented in Figure 2 are not classified anatomically but functionally, the idea being to trigger some supraspinal neurological and neurohumoral responses that could have either central or systemic repercussions — or both, hence the name given to these inputs. However, anatomically there are only a handful of areas that have demonstrated this neurofunctional capacity, including the auricle, the scalp, the midline of the face, and the distal areas of the extremities on the side of the arteries and big nerve trunks, all of which has been represented in the figure. Responses are incredibly diverse and interesting for systemic regulation via somato-vagal reflexes5 and supraspinal neurological and neurohumoral neuromodulation.6,7,8

Each of the neurofunctional and neuroanatomical interventions described above is supported by an abundance of miscellaneous scientific literature, mostly from animal studies describing neuromodulatory mechanisms and neuroanatomical pathways, but also from studies in humans. By having over 20 years of systemized, neuroanatomical and neurofunctional (and reproducible) data, the Percutaneous Functional NeuromodulationTM system has created a gold standard in neurofunctional electroacupuncture (or contemporary medical acupuncture), that is fully supported by science. It’s both easy to learn and easy to integrate with any other manual medicine intervention including rehabilitation programs.

In the upcoming years, adoption of a universally-accepted system of functional neuromodulation with fine solid needles and electricity, like the PFNM, will allow the final and full integration of this form of therapy in the daily treatment of pain with movement disorders by health professionals throughout the world.

Percutaneous Functional NeuromodulationTM was created by the author and further refined for the last two decades at the McMaster University Contemporary Medical Acupuncture Program.
References