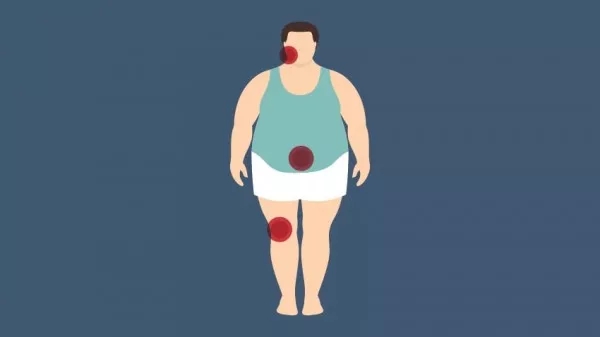 ANN ARBOR, Mich. – Until now, academic research examining the connection between body weight and related pain has been limited.

“It’s been known for some time that people who are obese tend to have higher levels of pain, generally speaking,” says Andrew Schrepf, a research investigator at Michigan Medicine’s Chronic Pain and Fatigue Research Center. “But the assumption has always been the pain is going to be in the knees, hips and lower back — parts of the body that are weight-bearing.”

A new study by Schrepf and colleagues at the University of Michigan sought to find out how (and where) these individuals experience widespread pain and comorbid chronic conditions such as fatigue and depression. In doing so, researchers measured how even a small amount of weight loss could make a big difference.

Published in The Journal of Pain, the study found that just a 10 per cent reduction in body weight helped patients with obesity reduce discomfort not only in expected spots such as the knees and hips but also in the abdomen, arm, chest and jaw.

Beyond those benefits, study participants who could reach that weight goal also reported better mental health, improved cognition and more energy compared to those who didn’t.

The results are significant because prior research hasn’t shown how weight loss effects diffuse pain throughout the body.

“We know when people lose a lot of weight they tend to feel better,” Schrepf says. “But astonishingly, no one ever looked at where in the body the pain gets better.”

Data collection and results
A cohort of 123 participants was tracked over a 12-week period where each was given a low-calorie liquid diet and a directive to gradually increase physical activity.

With access to phone, email and in-person support, participants were evaluated and counseled by physicians and dietitians who specialize in endocrinology and obesity medicine at Michigan Medicine’s Weight Management Program throughout the process.

“The focus in the program is on calorie restriction and long-term weight loss, although all patients are encouraged to get more physically active for the other health benefits that exercise provides,” says Dr. Amy Rothberg, the program’s director and associate professor of endocrinology nutritional sciences at the University of Michigan.

Cutting back on calories, she adds, can boost movement: “The truth is people are, paradoxically, far more energetic on a low-energy diet and find after they begin losing weight that they can do more and are more physically active.”

The U-M researchers relied on surveys of patient symptoms collected before and after the 12-week period using fibromyalgia assessment criteria to make the determinations.

Among all participants, 99 were able to lose 10 per cent or more of their body weight.

Those individuals reported widespread improvement in pain compared to those who didn’t meet the target goal. And the diversity of physical areas of improvement suggests that joints aren’t the only conduit of body pain.

“What we think that means is this process of losing weight may be affecting the central mechanisms of pain control related to the brain and spinal cord,” Schrepf says.

He and the team furthered that hunch by taking blood samples from one-quarter of study participants. Final samples revealed a spike in anti-inflammatory molecules — a key weapon in fighting many types of pain — compared to those collected at the start.

And while both genders who met the study’s weight-loss target reported increased energy levels, the effects were more pronounced in men. That divide, Schrepf says, could be related to evidence showing that obesity affects testosterone levels.

Next steps
The overall findings have the potential to help more patients in need pursue a weight-loss plan — but only with the proper guidance and medical care.

A primary care team should be the first group to determine if a patient is healthy enough to undergo major calorie restriction and the physical demands of increased exercise.

Just as important, however, is a support system that can offer continued guidance and motivation. Schrepf credits that approach for helping 80 per cent of the study’s participants meet or exceed their 10 per cent weight-loss goal – an “excellent” retention rate, Schrepf notes.

“It’s really clear that this kind of involvement at a personal level is critical,” he says.

More research is set to follow. The team hopes to identify why losing 10 per cent of a subject’s body weight was the divide for achieving results.

“Some of your earliest weight loss isn’t all fat; it could be water,” Schrepf says. “Somewhere around 10 per cent we’re reaching some kind of critical mass, but it’s hard to know exactly what that means.”

As such, they’d like to conduct a deeper phenotyping study on the issue — and also examine the role that calorie reduction plays in decreasing levels of pain.


Related
When it comes to weight loss in overweight and obese adults with knee osteoarthritis, more is better
Timing of exercise may be key to successful weight loss
Study looks at effectiveness of diet for weight loss
Obesity may lower pain threshold: study