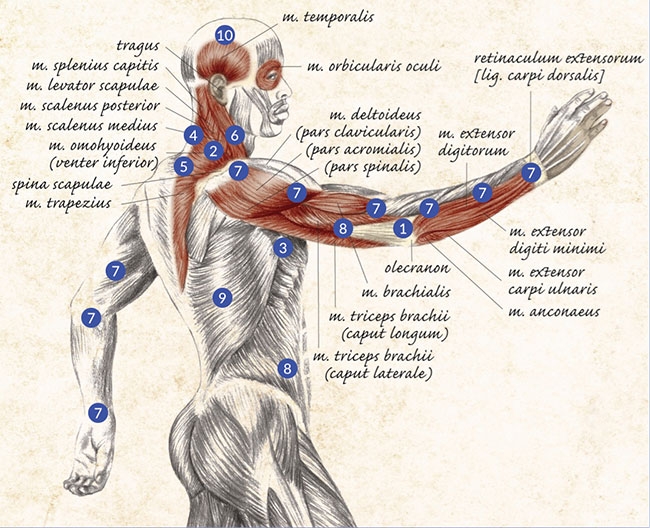 In the first article of this series, a detailed discussion of the number one contributor to a pain syndrome was provided (the activity of local nociceptors with receptor fields on relevant dermatomal, myotomal and sclerotomal tissues) (April 2019).

The second article discussed trigger points contribution from both myofascial tissues and viscera, as well as spinal contributions from somatic, visceral, and vascular sympathetic relevant levels of innervation, which also included post-ganglionic neurons from pre-vertebral and visceral ganglia (May 2019).

#7 Kinetic chain related contributors
Proximal and distal joints, proximal and distal muscles, and all associated peripheral nerves, whether cutaneous, articular, sympathetic or motor branches. These contributions, although not fully understood and difficult to define by its non-linear nature, are confirmed when pain with movement problems improve greatly and unexpectedly after the kinetic chain is treated.

One explanation for this non-linear improvement could be the restoration of movement variability and the improvement of tensional behavior on the kinetic chain, both produced by a variety of qualitative changes on different tissues, such as the trophic changes in the subcutaneous tissues, the articular restrictions due to synovial changes or micro-edemas of the periarticular regions, the miscellaneous regional edemas, or the micro-edemas of the peripheral nerves, particularly small articular branches.

#8 Tensional interruptions of the connective tissue network and other interference fields
Pervasive connective tissue and tensegrity system of the body extends from the cell cytoskeleton to the thick fasciae that wrap up the muscles, to the skin. The main cause for these interruptions is scars of all sorts, whether in the vicinity of the pain problem or anywhere else in the body, including scars in mucosae (like scars from tonsillectomy or a dental infection). The relationship between scars and pain at a distance is well documented in the scientific literature (particularly in German), and a whole treatment system called “neural therapy” developed by German physician Dr. Ferdinand Huneke, has been widely used in many countries for nearly 100 years. Dr. Huneke considered scars (as well as disorganized tissue from infections) interference fields that cause dysfunction of the autonomic nervous system, therefore affecting the body in different extent at different levels, i.e. locally, regionally and globally. He used a local anesthetic agent to block this interference field and prevent it from continuing sending afferent signals to the central nervous system – signals that were causing abnormal sympathetic nervous system activity and contributing to the pain problem. Over the years, scars have become my number one treatment target, with results ranging from mild improvements of pain to the miraculous disappearance of both pain and visceral symptoms. This is particularly true for hip and knee pain associated with scars from C-sections, appendicectomies and joint surgeries, particularly open surgeries.

#9 Metabolic, endocrine, and systemic factors
Together with #10, this could be the most complex aspect due to the intrinsic difficulty in defining (with precision) the many metabolic aspects potentially involved: hormonal, cellular, extracellular, tissular,systemic, gastrointestinal, enzymatic, cytoplasmic, mitochondrial, etc. Here are a few relevant metabolic facts concerning pain problems:

#10 Central nervous system factors: sensitization of nociceptive pathways and central supraspinal centers with autonomic, psychoemotional, and structural/neuroplastic changes
A vast topic, and an area of study in rapid development. Also, as pain is a brain event, all the factors discussed in numbers 1-9 need to be put in context in relation to the effects they may have in each particular brain neuromatrix. Some relevant points:

After reviewing the 10 most common contributors to pain syndromes, it is clear that the complexity of the pain experience requires clinicians to always take a multi-dimensional approach to the analysis and treatment of these problems. At the minimum, four areas of human physiology should always be involved in this analysis: behavioural, biomechanical, metabolic and neurological. If this was not enough work, the neurological aspects need to be further examined from multiple points of view as we have seen: somatic, sympathetic, peripheral, central, sensory, motor, and vascular. Pain with movement problems need to be addressed individually despite the existence of patterns and commonalities, which are often categorized as well defined clinical conditions. However, these conditions are just theoretical constructs and not true physiological entities or realities, and in actual clinical practice we are not dealing with “pain syndromes,” but with individual people who suffer complex pain experiences with multiple contributors.

Our patients deserve that we develop better clinical methods to investigate the pain experience in order to better understand each particular case, which in turn will lead to better methods of treatment based on sound physiological mechanisms. We are in a transition in pain medicine. From linear and mechanistic approaches that do not match our current understanding of physiology and physics to new non-linear, multi-dimensional approaches respectful of our contemporary understanding of biology. Every healthcare practitioner should participate in this pain medicine transformation by embracing the true level of complexity of these problems presented in this series of articles. Let’s all accept that treating pain is dealing with brains, and therefore embracing the highest level of complexity nature has produced. The era of soothing oversimplifications and convenient paradigms in the treatment of pain problems should be over soon.