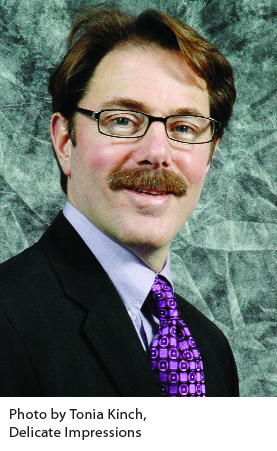 What are the 33 Principles, and, in your view, how do they apply to modern chiropractic?
The 33 Principles were first consolidated in 1927 in volume XIV of the Green Books.  This particular volume, by R.W. Stephenson, DC, was entitled Chiropractic Text Book.  The Green Books are a series of 39 texts describing chiropractic philosophy and technique that were published by the Palmer School of Chiropractic between 1903 and 1969.  Dr. Stephenson compiled the teachings and principles of both D.D. and B.J. Palmer up to that period, and his book received B.J.’s endorsement.
The 33 Principles are based upon unchanging, immutable natural laws, and I see them as chiropractic’s foundation.  They are the platform that we should think from.  I believe that these chiropractic principles should shape our educational and clinical decision-making processes and they should shape our research questions.  Research questions, in my view, should examine how subluxations, and the adjustment of them, affect function and physiology … and not just pain.
Upon accepting the 2002 Nobel Peace Prize, former U.S. president Jimmy Carter said eloquently, “We must adjust to changing times and still hold to unchanging principles.”  That resonates with me.

Some might view the 33 Principles as century-old spiritualism, or perhaps as quackery.  Wouldn’t these principles be expressed differently in today’s terms?
With all due respect, that would be like suggesting the Bible or the Koran should be modernized or articulated differently.  Whether we embrace it or not, natural law is fixed.  If the 33 Principles express logic that is sound, and I believe they do, then as chiropractors we have a duty to evolve to a point where we can comprehend their depth.   Chiropractors ought to at least educate themselves about the Green Books.
It has been said that, divested of its philosophy, chiropractic will lose its uniqueness and perhaps its future.  It is possible, and desirable, to merge philosophy with science.  Look at Dr. Deepak Chopra, whose mind-body thought was influenced both by the Bhagavad Gita and quantum physics.  Look at the leading-edge thinking of individuals such as Dr. Bruce Lipton, author of The Biology of Belief.  Look at what the field of psychoneuroimmunology is teaching us about the mind-body
connection.

How can these principles possibly synthesize with the new era of evidence-based health care?
I believe that our philosophy should drive our science.  B.J. Palmer was all for science and for collecting evidence concerning things chiropractic.  He expended a great deal of time and resources on the science of chiropractic.  He amassed an amazing osteology collection, and in the 1930s he flew to Germany to participate in brainstem research.

Doesn’t principle-based practice fuel the misconception that chiropractic is non-scientific?
Absolutely not.  Philosophy and science are two different cells in the body of chiropractic.  A principle-based chiropractor works from the premise that there is an innate intelligence in all living things.  In more complex organisms, this intelligence impresses itself upon the brain and expresses itself over the nervous system.  In this way, it runs the organism’s physiology and keeps it in balance with its environment.
A subluxation causes nerve interference, by definition, which upsets the organism’s balance.  A principle-based chiropractor checks patients for the presence of subluxations and then, only as required, adjusts those patients.  We also accept that patients deserve to live throughout their lifetime with an optimally functioning nervous system.
This way of thinking does not dismiss science but actually invites scientific inquiry.
Principled chiropractors do not declare war on the subluxation.  They also do not have a preconceived idea of the length of time or number of adjustments required for each case, which is assessed and monitored on its own merit.  Rather than scaring people into chiropractic care, just as our society has been taught to fear germs, we want to empower people to take responsibility for their well-being.

The political leadership of the chiropractic profession is working toward the integration of chiropractic into mainstream health care.  How does a principle-based chiropractic approach jive with mainstream health care?
Okay, let me point to the elephant in the room.  Our health-care system is broken and chiropractic didn’t break it.  Allopathic medicine, by the nature of its interventions, can be viewed as creating many additional problems for society.  However, it is invaluable and irreplaceable for crisis intervention.
Chiropractic, however, if made available to every Canadian, would have a huge positive impact on this nation’s health.  We all know that.  We need to create opportunities to prove that but we do not need to sell ourselves out and change our lexicon in doing so.  Chiropractic has so much to offer, and we are worthy of much more than the table scraps of lower back pain.
The first critical step is to harmonize as a profession, accepting what makes us the same and then understanding and celebrating our differences of technique and practice style.
Too many chiropractors try to be jacks of all trades.  We need to master the adjustment.  In my clinic, I apply principle-based chiropractic analyis and adjustment … and, for the most part, my patients get healthier.  Even if they are chronically or terminally ill, they have a better life experience as a result of being adjusted.
So how do I think we fit with mainstream health care?  By informing it and the world that we have a unique service to offer … and then being damn good at providing it.