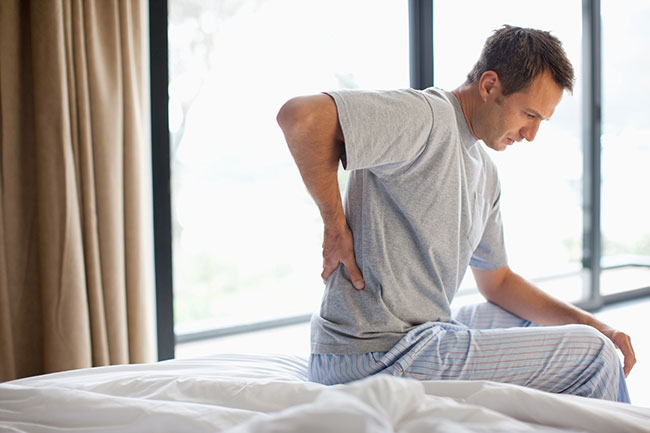 A total of 63 observational studies with a total of 10,726 participants were included.

MSK-related pain is a highly prevalent and costly condition (1) and is the second most common cause of disability in the general population (2). A myriad of biopsychosocial factors is associated with poor recovery from an acute painful episode. Chief among these contributing elements are negative or maladaptive psychological factors, such as fear avoidance beliefs and kinesiophobia (3-6).

The fear-avoidance (FA) model of pain is one popular framework, created to explain the development and persistence of pain and disability following acute injury (7, 8). The FA model stipulates that individuals with fear and catastrophic thoughts in response to pain are at greater risk of developing chronic MSK pain after an injury (9). These individuals tend to over-react in response to actual or potential threats and develop avoidance behaviours with the intent of preventing/avoiding new injury or re-injury. There is no specific tool (or questionnaire) for assessing fear of movement, apart from the clinical encounter itself.

Kinesiophobia (aka fear of movement) is defined as an excessive, irrational and debilitating fear of performing physical movements due to a perceived vulnerability to injury or re-injury. It is often assessed by administering the Tampa Scale of Kinesiophobia questionnaire. Kinesiophobia is very similar to the construct of fear avoidance beliefs and has essentially the same clinical relevance. Kinesiophobia can be acquired through a direct aversive experience (ex. pain or trauma) or social learning (observation and instruction) and may be associated with increased pain and negative outcomes. Not surprisingly, there is an exceedingly high prevalence of kinesiophobia in chronic pain populations (50-70%). While fear and escape behaviours are defensive and adaptive in the short term, avoidance activities can become maladaptive in the long term, leading to deconditioning, emotional distress, greater pain, disability, and as a result, poor quality of life.

The authors of this systematic review sought to explore the level of association between kinesiophobia and pain, disability and quality of life (QoL) in people with chronic musculoskeletal pain, and to analyze the value of kinesiophobia as a prognostic factor.

Pertinent results
A total of 63 observational studies with a total of 10,726 participants were included. The results of the synthesis will be outlined based on the study designs listed below.

Longitudinal analysis of the prognostic role of kinesiophobia showed that higher baseline values of kinesophobia are associated with a higher disability over time; are predictive of higher pain severity at 6-month follow-up, with limited evidence; are predictive of lower QoL at 6-months, with limited evidence; and that kinesiophobia is a predictor of changes in pain intensity, with conflicting evidence. Unfortunately, causality could not be firmly demonstrated in the analysis, as there was a low total number of longitudinal studies which met the inclusion criteria. Because of this, the authors recommend that more longitudinal studies be performed.

The authors also acknowledge that kinesiophobia is a known modifiable barrier to rehabilitation adherence in various chronic pain conditions, that when appropriately treated can facilitate earlier achievement of pain relief and functional recovery. They advise that clinicians identify the presence of kinesiophobia prior to the prescription of any intervention, since its presence may require clinicians to take a holistic biopsychosocial approach to rehabilitation programming, such as selection of functional goals, education to manage safe behaviours and graded exposure to fearful activities.

Study methods
This review was conducted in accordance with the Preferred Reporting Items for Systematic Reviews and Meta-Analyses (PRISMA) statement. The PECOS (Patient Exposure Comparator Outcome Study design) framework was followed to determine which studies to include in the systematic review, based on the following inclusion criteria:

The exclusion criteria were as follows:

Risk of bias was assessed using the Newcastle-Ottawa Scale (NOS), which is known to measure selection bias, performance bias, detection bias and information bias. Each item is scored from 0 (high risk) to 3 (low risk), to a total maximum of 21 points. Qualitative analysis of the evidence was carried out using the Modified Cochrane Back and Neck Group rating system (strong evidence; moderate evidence; limited evidence; no-evidence found; and conflicting evidence categories).

Studies were grouped based on the outcomes of disability, pain and quality of life for the primary analysis. A meta-analysis could not be carried out due to heterogeneity of participant age, sample size, pain condition, outcome measures, version of self-reported kinesiophobia questionnaire (ex. TSK-11 or TSK-17), statistical methods utilized and study design.