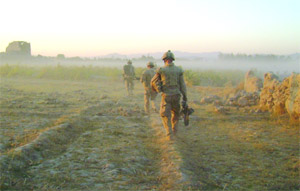 In October of 2006, the Taliban murdered five Afghan medical staff. It is their belief that all government employees are traitors to Islam.”

(LEFT) Beside Pasad Village, cimic officers return to defensive position after a foot patrol to conduct battle damage assessment.  After clearing fields of fire – targeting hidden Taliban members – Canadians assess damage in order to compensate Afghans, who were evacuated prior to the mission.

Dr. Denis Tondreau, a chiropractor from Orleans, Ont., can relate this directly as a result of his experience as a civil-military co-operation (cimic) officer with NATO, trained and deployed to Afghanistan from March 2006 to March 2007. Dr. Tondreau was based at Camp Nathan Smith as a member of the Kandahar Provincial Reconstruction Team (KPRT). He was initially a team leader of a KPRT detachment and was responsible for the Zharey District, approximately 40 kilometers to the southwest of Kandahar City.  In January of 2007, Dr. Tondreau took over as the operations officer and was responsible for co-ordinating the reconstruction efforts of all the KPRT detachments.

The KPRT is a “whole government approach” to reconstruction and is comprised of various organizations such as the Canadian International Development Agency (CIDA), the Department of Foreign Affairs and International Trade (DFAIT), the United States of America International Development (USAID), the U.S. State Department and Canadian Forces (CF) components. The CF portion includes a technical engineer team, military police, security forces, support personnel and a cimic detachment. The cimic detachment is com-prised entirely of army reservists and is the primary enabling tool of the KPRT.  The cimic officers are selected from army reserve regiments across Canada for their combat arms proficiency, leadership and their civilian skill set. Civilian qualifications are considered to add value and increase the credibility and capacity of the organization as it assists the Afghan people and government.

It is worth noting, then, that among the selected professionals – including a teacher, police officer, forestry director, information technologist, public service worker, agricultural and international relations specialists, engineer, and ER nurse – a doctor of chiropractic was considered an important choice for the team, for his/her skills and health-care knowledge.
Because of Dr. Tondreau’s expertise in the health field, he was tasked to assess the health-care facilities and health-care delivery. He worked with the Afghan Health Development Services (AHDS) and medical outpatient clinics to develop facilities and improve Afghans’ access to health care. AHDS is a non-governmental organization (NGO) contracted by the Ministry of Health to provide basic health-care to rural Afghanistan.

The lack of medical staff to those areas compounded the high infant mortality rate – which is 42 per cent prior to age five – and high incidence of infectious diseases such as tuberculosis, hepatitis, gastro-intestinal parasitic infections, typhoid and leishmaniasis to name a few.  (Leish-maniasis is a dermatological condition caused by phlebotomine sandflies, and resulting in disfiguring skin lesions.)

Ideally, KPRT detachments would move into areas that were secure, or recently rendered secure by the actions of Coalition Security forces, to do reconnaissance and assess regions for infrastructure, government, security forces and standards of living. However, operating within a secure environment was often not possible.

Liaison with tribal elders, to discuss issues and needs, was essential to encourage self- governance and capacity building. Priorities would be established that were consistent with both the tribal needs and KPRT policies. The tribal elders were expected to formulate plans and implementation strategies before the KPRT would support the projects. This would facilitate capacity building and ensure a sense of ownership.

The intent of all these initiatives was to establish, and maintain, a safe and secure environment by extending the influence and authority of the legally elected government of Afghanistan. In some cases, certain areas are under the influence of the Taliban and a continued physical presence is required to facilitate the reconstruction efforts. In other cases, the Taliban are unwanted, and an intermittent presence with minimal supervision of projects was sufficient to maintain the reconstruction momentum.

The value of chiropractic for KPRT projects
On arrival in Afghanistan, Dr. Tondreau reported to the Role 3 medical facility at Kandahar Airfield. He met with the chief of staff, Major Savage, and discussed providing chiropractic services to co-alition soldiers. Major Savage was very receptive and enthusiastic concerning this unexpected offer of assistance.

According to the military medical community, 80 per cent of injuries sustained by coalition soldiers are musculoskeletal. Conditions predisposing the soldiers to these injuries are multiple and exposure is daily. Carrying heavy loads, cross-country driving, restricted space in armoured vehicles, sleeping on the ground or on camp cots for extended periods of time, long work hours, rugged geography, geographical elevation, climate, combat operations, hard rations eaten for weeks at a time and the stress of being in a hostile environment all contribute to spinal stress.

A soldier’s basic load, which he is required to wear daily once he has left the security of the base, weighs in excess of 65 pounds. A basic load includes items such as weapons, body armour, helmet, ammunition, grenades, radio, night vision goggles, water and food. Certain patrols require the soldier to wear a patrol pack, weighing an additional 40 to 75 pounds. Therefore, it is not be uncommon to wear 100 to 140 pounds of equipment on a dismounted – i.e., foot – patrol.

Afghanistan is approximately the size of the state of Texas. It is a mountainous country with a semi-arid to arid climate. Geographical elevation varies from 1,000 to 9,000 feet ASL. Temperatures vary seasonally. Seasons are similar to Canada; however, the temperature range is different. In Kandahar province, summer highs may reach 55 degrees Celsius and winter lows of minus 5 degrees Celsius.

The armoured vehicles currently in use by the reconstruction detachments are the RG 31, or Nyala, and the LAV III. The Nyala is a South African design that has been proven to be very effective at minimizing the explosive effects of road-side bombs or Improvised Explosive Devices (IED), suicide attacks and mine strikes. However, the vehicle has limited space and stiff suspension, making cross-country driving hazardous, thus leading to excessive compressive loading of the spine.

For those soldiers deployed “outside the wire,” sleep conditions became a compounding stress factor.  The requirements for maintaining security will reduce the quality and quantity of sleep.
Afghanistan poses asymmetrical stressors on the soldier. The war on terrorism is not a conventional war like the World Wars. For the most part there is no front line. The threat may come from anywhere, at anytime.  The enemy does not respect the Geneva Convention and thus they cannot be distinguished from the civilian population.  They will employ tactics that are illegal according to international law. The Taliban will target innocent civilians in their attacks. As a result, the emotional stress of living and working in this type of environment will result in physiological stress reactions that potentiate the physical stressors. The daily exposure to physical, emotional, thermal and chemical stressors will inevitably compromise the well-being of the soldier. Chiropractic has an obvious role in providing health care to these men and women.

Due to this high incidence of musculoskeletal injuries to coalition soldiers, Major Savage immediately recognized the value of providing chiropractic to the soldiers. This attitude was echoed by many other medical staff.

However, the Surgeon General of the CF Medical Branch felt that there was not enough time to include chiropractic in the terms of reference that had been specified for Dr. Tondreau – the process for its inclusion would be much longer than his deployment period – and, therefore, stated that it was her opinion that offering chiropractic was not feasible for him.

The bottom line became that, due to a bureauocratic technicality, chiropractic services were officially eliminated from Dr. Tondreau’s scope of duties. However, Tondreau and the medical staff at the Kandahar Airfield medical facility will be looking into the matter to assure that if, in future, a chiropractor is deployed to their location, that chiropractor will be officially permitted to treat soldiers and other patients.

“The need for chiropractic in this environment is self-evident – and the government must be made aware of this,”  states Dr. Tondreau.

The Aftermath for Dr. Denis Tondreau
Dr. Tondreau has returned to his chiropractic practice but continues to serve in the Canadian Forces. He currently resides on a small farm outside of Ottawa with his wife and three children. He built a solar/wind-powered home six years ago, grows organic foods for the family’s own consumption, produces maple syrup and has several horses for recreational equestrian and farm work.

He is expected to deploy again within the next several years to the Sudan.•