A look at chiropractic research in Canada 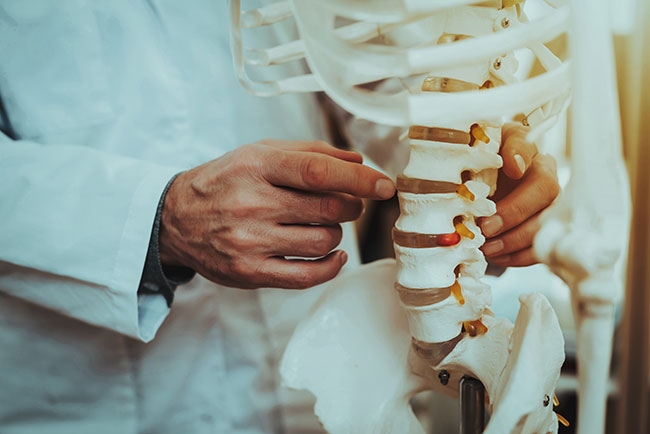 “How did my hands, in my office, do something that the big hospital down the street could not do?” Photo: istock

I am a proud chiropractor – it is part of who I am. Most days, I adjust patients and work on reports. I take the time to learn and be better at what I do.

In my 29 years of practice, I can recall some interesting patients:

Case #1: A woman complained of headaches. My assessment found she had a secondary problem – grave difficulty walking. Her left leg from the knee down was three times its normal size and I questioned her. She had been to four different medical physicians and three specialists, but all were unsure why her leg was like this. Their course of action was amputation of her leg at the knee. I checked her spine and began a trial of adjustments. Her headaches started to go away. Her leg returned to standard size and function. I adjusted her spine and pelvis, but I didn’t do any therapeutic work on her leg. Her specialist cancelled her amputation.

Case #2: A female patient with persistent headaches. I checked her spine and began to adjust her. Her headaches started to decrease in frequency and intensity. This outcome was great, but she also happened to be blind. For 17 years, she had been receiving assistance from the CNIB. She had a white cane and could not read or see a television. As I adjusted her, her headaches decreased and she began seeing, reading, and watching T.V. After six months, she chose to stop care, but three months later she came to my office and once again she had lost her sight. I began to adjust her, and her sight returned.

How did my hands, in my little office do something that the big hospital down the street, with all its equipment, staff, money and physicians could not do? I want to know.

I have talked to many chiropractors and heard similar stories to mine about patients who changed and healed after they received adjustments. I aspire to be a better practitioner and continue to search for an explanation for why and how this patient’s leg healed and why the patient’s eyesight restored. The profession needs better research to help us understand why what we do works. Science gives us a better understanding and credibility.

Balance in the profession – the three-legged stool
The science of chiropractic is essential to support the profession, but it’s only one element of the three needed. To further explain, one could use an analogy of a three-legged stool. In the analogy, the chiropractic profession is held up by three distinct “legs.”  The three legs of the stool are: 1) the philosophy; 2) the science; 3) the art. Philosophy guides the science, science is used to support the philosophy, and the art is the practical application of the profession. Each leg holds up the stool, and without any of the three, the stool becomes unstable and falls. Philosophy is the guiding principle behind the profession. Science is the body of facts and truths systematically arranged, showing the operation of general laws. Art is the individualized skill used in the practice of the profession to approach the patient. Art includes the focus of the care: therapeutic or non-therapeutic, the type of adjustment, and the use of modalities, and ancillary care (or not).

Ian D Coulter, Ph.D. (past president of CMCC) in his keynote speech at the 2006 Canadian National Chiropractic Convention held in Vancouver B.C., commented on the dichotomy:

“Part of the challenge for chiropractic as a profession is there has always been a strong element of diversity within the profession. It is sociologically interesting to ponder why this is the case. Why have these groups not been driven out or broken away to form a new profession as opposed to forming just different associations?

Part of the answer might be that as a group that has been widely discriminated against on the broader health care system, chiropractors have been reluctant to disown, disbar members of the profession even those with which they have strong disagreements.

It might also reflect the fact that unlike medicine where a dominant paradigm (biomedicine) has characterized the profession, no such standard has enjoyed such dominance in chiropractic. At least two significant paradigms have coexisted – straights and mixers. However, even within these groupings, individual chiropractors have enjoyed considerable freedom to ‘mix and match’ therapies.”

To support one’s philosophy in chiropractic, you need science. Science is, by definition, a method of questioning the facts and looking for new and better knowledge. Science supports both vitalistic and mechanistic philosophies. Researchers are the people who focus on moving the science forward by conducting research.

The profession of chiropractic was traditionally built on being unique and different. Historically, our uniqueness has allowed us to survive (Wilkes trial).

Dr. Greg Kawchuk was chosen to present on Canadian Chiropractic Research at the Canadian Leadership Summit sponsored by the CCA in 2015. He stated we have limited people and limited funding for chiropractic research and we had to be selective with the research we do. He noted mechanistic-based chiropractic is the priority because it will help us gain acceptance and credibility.

The lack of vitalistic-based research is held up as “proof” that traditional vitalistic chiropractic is “not scientific” and should not be utilized. However, this is a circular argument; they choose the research, focus their research in one direction, and then state this direction is correct because it has more research. Lack of research does not mean the philosophy is not credible; it means the investigation has not yet been done! Philosophy is a guiding principle, or a lens through which one views the world. It is not scientific or unscientific, but like other philosophical positions, it has or does not have science backing its tenants.

In university settings, traditional chiropractic philosophy and words are generally not used, and or understood, so the researchers have changed their vocabulary and philosophy to fit in.

This is a relatively small group, mainly made up of non-practicing chiropractors (researchers and educators) pushing to redefine chiropractic and change the scope of the profession so that it is only based on the current science available at this time. They use the term “evidence-based care,” but this group is only in support of care proven by randomized control trial (RCT) studies. RCT studies are only one part of evidence-based care, and this focus excludes a large amount of care currently covered under the scope of chiropractors in Canada. This has power because they have a following of chiropractors that are in awe of them and their academic positions and credentials. They are pushing the profession and schools to move away from traditional specific chiropractic techniques and more to general manipulation techniques, exercise, and other modalities.

Tail wagging the dog
We now enter a scenario where we have trained and hired chiropractic researchers, but we have not adequately funded them. In turn, they have been left to survive in mainstream academic settings. To compete in this field, work collaboratively, gain grants and publish, they have morphed what they do, and adopted a more medical view of physiology and what a chiropractor can, does, and does not do. There are now few chiropractic researchers in Canada that research traditional chiropractic. The focus of the research, for the most part, is biomechanics, pain and epidemiology. In turn, the main questions that come from practicing chiropractors are ignored. Why do miracles happen in chiropractic offices? Why is chiropractic unique and distinct from medicine and physiotherapy, and how come patients improve under our care when they have failed in the care provided by the more mainstream health professions?

Why do some chiropractors continue to make claims about the remarkable healing that chiropractic can bring, and why do they insist on practicing in a vitalistic way? Is this just ignorance, charlatanism, laziness or a lack of scientific credentials, as some have claimed or it there something more? Is this a “something” that should have further scientific research? We need our chiropractic researchers to move beyond the “low hanging fruit.”

We now have a group of chiropractic researchers in Canada who are no longer working to give scientific support to our profession. Instead, they are trying to morph the definition and scope of our job to fit their research agendas – “the tail wagging the dog.” Unfortunately, if the “evidence-based” splinter groups agenda is successful further medical standards will be forced on the profession, we will lose our unique and distinct status, and chiropractic will become an offshoot of physiotherapy.

Dr. Brad Lohrenz runs a private chiropractic practice in Halifax, N.S. He is a Canadian representative to the Board of the ICA (International Chiropractors Association) and past chair of the Nova Scotia College of Chiropractic.
Print this page