A diagnosis of Arnold-Chiari malformation was made. 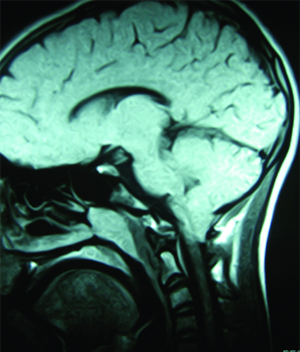 I hope that everyone had a healthy and enjoyable holiday season.  I would like to wish you all a successful 2006! Thanks to my colleague, Dr. Ray Conley, of Overland Park, Kansas, for this case.

This 32-year-old man presented with headaches.  (Figure 1)  MRI examination revealed herniation of the inferior cerebellum through the foramen magnum.  A diagnosis of Arnold-Chiari malformation was made.

Discussion:
Several abnormalities in the brainstem area can be present here, with elongation of the cerebellar tonsils, which protrude caudally through the foramen magnum.  Thickening of the upper cervical cord may occur.  Hydrocephalus due to blockage of the 4th ventricular outlets may result, with a surgical shunt sometimes required to bypass the obstruction.  There is a frequent association with spina bifida and syringomyelia.  The etiology is unknown, but it is believed to be a congenital condition.  Research has shown little correlation between length of herniation and degree of symptomatology.  The current focus of research is concerned with how the malformation impedes the normal flow of cerebrospinal fluid.

Chiari type II
•    most common major malformation of the posterior fossa
•    more common in children
•    displaced 4th ventricle and brainstem with herniation of the cerebellar tonsils, pons and vermis down into to cervical canal through the foramen magnum
•    virtually always results in obstructive hydrocephalus and a lumbar myelomeningocele

Symptomatology can vary, depending on severity of the defect.  Chiari type I can present with vague symptoms suggestive of cervical radiculopathy.  Types II and III are more serious and debilitating; symptoms cover a large range, and may include extreme pain in the neck and the shoulders, severe headaches brought on by coughing and straining, trouble swallowing or speaking, loss of bladder and bowel control, numbness in hands and feet, loss of fine motor control, and balance problems.  Type III usually leads to death during infancy.•