In this issue, we will review the main classification of diaphragmatic hernias:

In this issue, we will review the main classification of diaphragmatic hernias:

1. Esophageal hernia
•    herniation of all or part of the stomach through the esophageal hiatus into the thorax
•    the most common diagnostic entity identified on X-ray of the upper gastrointestinal tract
•    found to some degree in 10 per cent of the adult North American population
•    “sliding” type, involving the esophogastric junction and a portion of the gastric fundus; accounts for 95 per cent of these hernias
•    “paraesophageal” type, in which the junction remains fixed below the diaphragm, with only a portion of the fundus herniating; represents only 1 per cent of hiatal hernias
•    hernia produces a mass shadow at the left medial base
•    often can visualize air/fluid level in the intrathoracic portion of the stomach superimposed over the cardiac silhouette
•    this permits diagnosis on plain film (Figure 1) 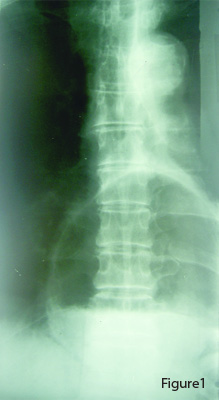 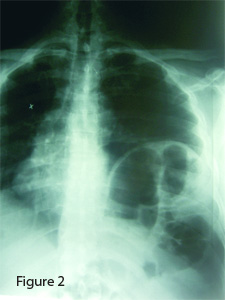 •    if not, the abnormality can be readily identified with a barium swallow
•    the barium swallow also helps to differentiate this lesion from a pulmonary cyst or abscess, or a diaphragmatic tumour
•    associated symptoms of reflux are usually the only clinical significance

2. Foramen of Morgagni hernia
•    rare
•    basal mass shadow
•    usually small, containing some omentum and portion of bowel
•    barium enema study may show upward angulation of the midtransverse colon
•    pyloric region of stomach and proximal duodenum may be displaced upward
•    in infants and young children, the liver may rarely herniate through the foramen of Morgagni
3. Foramen of Bochdalek hernia (Figure 2)
•    herniation through the pleuroperitoneal foramen of Bochdalek
•    often large herniation
•    loops of bowel are visualized
•    occasionally accompanied by left kidney
4. Traumatic herniation
•    from severe crushing types of injury to the thorax or abdomen
•    diaphragm may be ruptured completely, with defects in the parietal pleura and peritoneum
•    left diaphragm involved in 95 per cent of cases
•    if necessary, barium meal or enema may aid in identifying the portions of the gastrointestinal tract within the hernia
•    MRI examination will also help clarify gastrointestinal status