Outlook on chiropractic this year and beyond 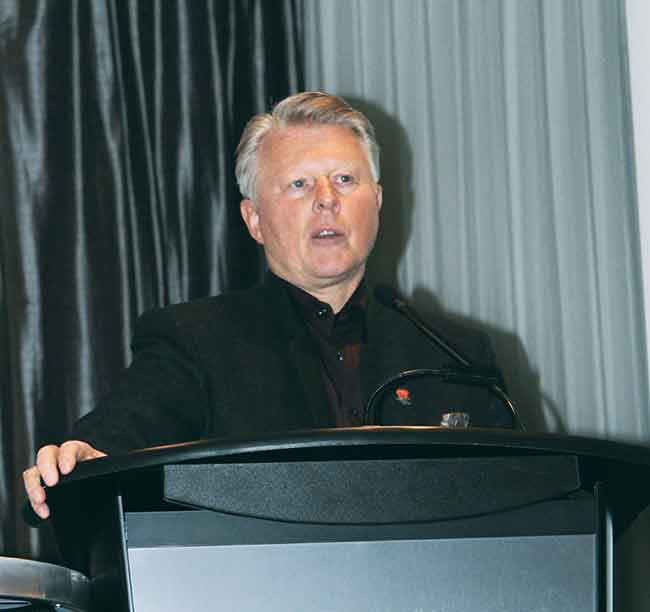 Speaking at the B.C. Chiropractic Convention in November 2015, Dr. Kim Humphreys emphasized the importance of research in moving the profession forward.

Have you checked your online reputation lately? If you have no idea where or how to check what people are saying about you, it’s high time to keep up with the times.

Online reputation management is only one of several trends chiropractors should pay attention to in 2016 and beyond. Patient-centred care, collaboration, social credibility – these are terms DCs can expect to hear more of as the new year ramps up.

No ‘I’ in ‘team’
Collaboration is not a new concept in health care. In fact, many health care service providers, including DCs, are already engaging in collaborative care settings, albeit in varying degrees. However, as health institutions continue to develop and implement models of patient care that are both effective and efficient, expect increased participation by DCs in interdisciplinary health practices.

“There’s going to be definitely a move toward team-based collaborative working in the future. Those professionals wishing to embrace this must be accepting of different models of care,” says Dr. Greg Stewart, a Manitoba-based veteran chiropractor and president of the World Federation of Chiropractic (WFC).

Chiropractors have historically operated in sole practices with little opportunity for collaboration. Moving toward a team-based, interprofessional working model may be a big shift, particularly for those who have been in solo practice for a number of decades. More recent graduates and future chiropractors, however, may find the path to team-based collaboration a little clearer as educational institutions respond to this increasing trend in chiropractic care.

At least one Canadian university is already training a generation of collaborative health-care providers. The University of Toronto’s Centre for Interprofessional Education has been training students from its health professsions programs on interprofessional education, as part of their mandatory requirements.

The Canadian Memorial Chiropractic College (CMCC) has affiliations with hospitals and community health centres across the Greater Toronto Area, where students are exposed to multidisciplinary care settings.

In Switzerland, chiropractors are trained alongside medical students, and have nine years of medical education under their belts. Dr. Kim Humphreys, a chiropractor born in Kelowna, B.C., is the head of the Chiropractic Medicine program at the University of Zurich.

“You need education, experience and skills. I think four years of chiropractic education is not enough. They have to seek out further education. It will give them more credibility in whatever area they’re interested in,” Humphreys says.

Patients first
An important way to get people to buy into chiropractic is by “making the patient more important than the doctor,” Stewart says.

Health-care organizations and public health advocates are increasingly demanding better care from their health care providers through patient-centred approach. Again, this is not a new concept, but focus on patient-centred health care has gained momentum in the last couple of years. Expect this to continue through 2016.

Getting on the bandwagon of patient-centred care, however, must go beyond just providing excellent customer service. Patient-centred care is also what’s driving the shift toward interprofessional collaboration, as teams of health practitioners increasingly adapt a “one patient, one chart” model.

Education is key for chiropractors to become a credible, equal player in an interprofessional patient-centred care model, according to Humphreys.

“Our profession would be a lot better off if we stop focusing on ourselves,” Humphreys comments on the future of the profession and lessons he has learned from the Swiss model. “We should constantly be talking about how we’re going to be better practitioners for our patients – how do we work in a team. It should be all about the patient.”

Follow the evidence
Research and evidence-based practice is becoming increasingly important for chiropractic as the profession continues to gain credibility in health care and the public. Expect to see more movements in the profession to advance the chiropractic research agenda.

The Canadian Chiropractic Guideline Initiative (CCGI) has upped its game in the last year with several initiatives aimed at narrowing the gap between research and clinical practice. Its Opinion Leaders program serves as a resource for practitioners to adopt and implement clinical guidelines and promote evidence-based practice. The CCGI has also accelerated its Practice-based Research Network, which brings together researchers and clinicians to further close the research-practice divide.

“The majority of the profession has clearly shifted toward recognising the value of research and evidence-based care,” Stewart says. “Whether your [practice is] ‘vitalistic’ or broad scope, there is going to be a need for evidence and research to support the care that chiropractors provide.”

Research can come in different models – quantitative or qualitative. Stewart believes whether a chiropractor’s path of practice is broad scope (mixers) or narrow scope (straight, philosophical), it always has to be based on the evidence.

He anticipates, as the trend toward evidence-based practice continues, that there will be an increasing “vocal intolerance for practitioners that are not patient-centred or whose practices are not grounded in evidence.”

The University of Zurich professor agrees that research will fuel the future of the profession. Humphreys and his team at the university has undertaken significant research over the last several years focused on clinical outcomes of chiropractic treatments of neck and back pain.

He believes the next frontier for chiropractic research will be on the brain and the nervous system, as major advances in neurosciences and neuroimaging are now enabling the investigation of chiropractic and the central nervous system.

“In chronic conditions, the brain is the battleground… the neurosystem needs that stimulation and manipulation,” Humphreys says, adding, “I think it’s exciting to be able to come back to some of the original ideas of chiropractic.”

Online reputation
In the realm of information technology, chiropractic practices should start paying attention to their online rankings, according to Rick Tielemans, marketing director for Full Circle Coaching in Toronto.

As consumers’ buying habits are now heavily influenced by what they find in online searches, the same appears to be happening when choosing a service provider. In fact, according to the 2014 Edelman Trust Barometer, 65 per cent of Internet users see online search as the most trusted source of information about people and companies. A 2013 survey by search engine and reputation management firm BrightLocal revealed 79 per cent of consumers place equal weight on online reviews and personal recommendations.

“Consumers look up an average of 10 (online) reviews before making a decision,” Tielemans says. “One warm referral is not enough for them to actually make a decision.”

Try doing a Google search, type in your name or your practice name and your location. See what comes up in the search result. Are people posting reviews about their experiences at your clinic? What star ratings do you have, if any?

Sites like Google Maps, Yelp and RateMD are the best places to start building your online reputation – and it doesn’t happen overnight.

“Reputation is something that takes years to create, in terms of goodwill and rapport but it could be destroyed in one minute because of a negative experience,” Tielemans explains. Ofsetting one negative review online will require 12 positive reviews, he adds.

As a general rule, it is acceptable to incentivize patients or clients to leave an online review (whether positive or negative). However, it is unethical to incentivize people for leaving only a good review, Tielemans says.

Take a proactive approach and don’t leave your online reputation to chance. If current statistics are any indication, chances are potential new patients will likely search you up online before making the call to see you.

“An on-going issue is embracing the identity of the profession as spinal health experts,” Stewart says. “That’s what we are aspiring to… but we are not going to be identified as experts in spinal care if we don’t have an image of being leaders in MSK (musculoskeletal) care and management.”

He says education will be key to elevating the profession from its public image as MSK experts to attaining its identity as spinal health care experts.

“We need to increase the standards of education so that we are actually being educated alongside those who become collaborators in health care,” Stewart notes. He cites CMCC’s collaboration with universities such as the University of Winnipeg, University of Ontario Institute of Technology and University of Toronto as steps in the right direction and “goes a long way in enhancing the credibility of the profession,” and allowing it to assume its identity in spinal health care.

A few words on social
Social media continues to emerge as the new frontier for business marketing. Businesses are engaging consumers on a personal level through social media sites like Facebook.

The online world provides tools and insights never before available to businesses. On Facebook alone, more than a billion people are actively engaging. If you don’t already have a Facebook page, consider creating one.

“More businesses are creating Facebook pages,” Tielemans says. “Having that fan page is important for social credibility, and it’s an easy way to stay engaged, interact and be top-of-mind.”

Using your Facebook page to engage people, existing and potential patients, helps build on the ‘know-like-trust’ factor, according to Tielemans. “People tend to be more forgiving if you’re running behind in the practice, for example, because they’ve got that know-like-trust piece. They refer people just because they like them.

Mari-Len De Guzman is the editor of Canadian Chiropractor magazine. She has worked in media for more than 15 years and has been editor of several business and professional publications. Contact her at mdeguzman@annexweb.com.
Print this page