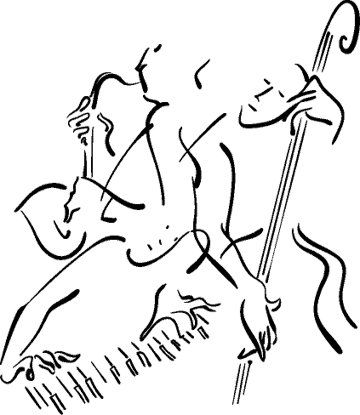 Our bodies are very much like musical instruments – both need to stay in tune in order to perform at their very best.  While this is true for the general public, for those who make their living through music, physical health and well-being can represent the difference between encores and unemployment.

Whether they are a violinist with the Toronto Symphony Orchestra or the lead singer of a local rock band, musicians have a knack for making what they do look easy.  Appearances aside, however, the reality of a musician’s life demands hours and hours of rehearsal followed by gruelling live performances, all of which can result in tremendous physical strain.

Susceptible to repetitive strain injuries such as carpal tunnel syndrome, De Quervain’s tenosynovitis, cubital tunnel syndrome, and trigger finger, musicians tend to also suffer from neck and back pain that is triggered by faulty posture and repeated movements.  Such aches and pains can compromise overall health, hinder efficient performances and restrict normal movement.

While these problems may be common among musicians, they can be prevented.

According to Dr. Larry Feldman, director of The Performance Health Centre (TPHC) and himself a Toronto-based musician, “those who play an instrument can greatly benefit from sustained chiropractic care.” 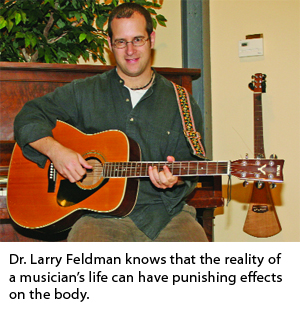 “Chiropractic not only addresses injuries, but will help musicians avoid the risk of further injury,” says Feldman.  It appears that musicians are finally recognizing the benefits of chiropractic that have long been appreciated by the sports community.  “At TPHC, we design regimens specifically to meet the needs of musicians,” he says.  “We understand injury prevention and treatment.”  Under Feldman’s direction, TPHC recently opened its Liberty Village location in the downtown core’s thriving west end.

“Liberty Village offers a dynamic, young, and hip vibe,” says Feldman. “The sense of cool that exists throughout the neighbourhood is something we have tried to echo in our clinic.”  From the music videos playing on the plasma screen, the copies of Rolling Stone in the waiting area, to the collection of guitars and the Heinzman upright piano prominently displayed, they have created a smooth environment that is familiar and comfortable for their unique patient-base.

The clinic team’s unique focus on the needs of artists and musicians necessitated a careful selection of health-care professionals.

Among the principals at TPHC is Dr. Glenn Engel, who is a professor of clinical sciences at the Canadian Memorial Chiropractic College (CMCC) as well as an acupuncturist.  Few CMCC graduates might know that Dr. Engel is also a highly accomplished musician.  Another member of the business is Feldman’s partner and fellow musician Andy Cardoso, RMT, who contributes his massage therapy skills and marketing savvy.

Counselling and reflexology round out the services delivered at TPHC, which, says Feldman, is committed to helping people to achieve optimum health and perform at their personal best.

“While we have only recently opened the clinic, we have begun to build a patient list that reflects some of the Toronto music scene’s brightest lights,” says Feldman.  “From those who play music, to those who are responsible for the industry’s business side, people are responding to the clinic’s uniqueness, focus, and dedication.”

Regardless of whether one is or isn’t a musician or music lover, the body is everyone’s most important instrument, observes Feldman.  “Keep it tuned,” he advises.•