Features Opinion
What’s in a name? The emotion, entitlement and status of the “Dr.” title 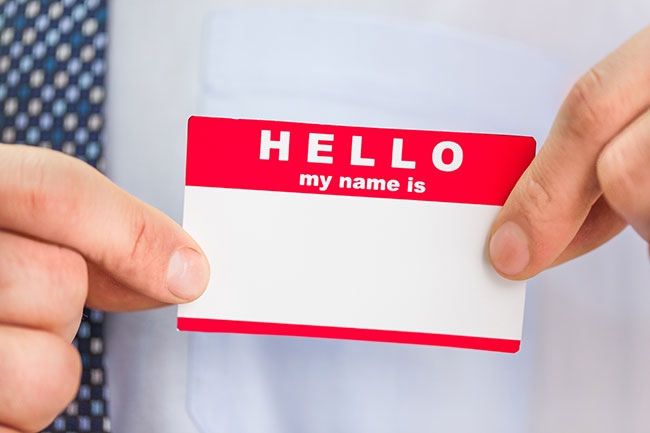 On occasion, I have observed the indignation of detractors when a chiropractor is identified as Dr. X. There is usually a short and concise vitriolic declaration stating opposition to the formal designation.

Their indignation appears to fulfill an obligation to correct a great injustice and subsequent societal deceit of the given practitioner. I have not observed this behaviour being directed at the other non-medial professions who also have the legal privilege to the title of “doctor,” such as dentists, podiatrists, optometrists, veterinarians or psychologists.

I have not observed or experienced a situation in which title was utilized by a chiropractor to surreptitiously portray a medical education or licensure. As a practitioner, we certainly desire all patients to be well aware that they are not presenting to a medical facility. As well, all external communication is undertaken by a chiropractor, whether it be signage, business cards, office stationery or social media is mandated by legislation to be clear on professional identity.

Considering the paucity of evidence regarding marketplace confusion, perhaps there are other factors afoot that evoke the indignation.

The title is not uniform around the world in chiropractic or other healing arts, including medicine. In my province, Manitoba, the legislation is very clear. Use of the title “Doctor” is permitted as long as the designation of licensure as a chiropractor is clearly stated; Full Name, Doctor of Chiropractic or Dr. Name, Chiropractor. Marketplace confusion is not the will of government or my colleagues.

Title in society is intriguing. Social stratification can take several forms, generally categorized as being ascribed (caste, legacy, inheritance, race) or acquired (wealth, education). At its core is a determination of relative and implicit social value. Status hierarchy implies benefits of income, influence and the allocation of resources, among its influence and control. In order to have societal value, it must be relatively hard to attain and any “watering down” of entry is met with both open and clandestine resistance. The French sociologist Pierre Bourdieu refers to this as social capital. It is also evident that ascribed status increases the likelihood of achieved status through access to education, via both funding and nepotism.

I have recently observed some social media discussion regarding title within a chiropractic clinical setting. It appears that many practitioners are uncomfortable with utilizing the title of Doctor with their last name. It is very common within the profession to combine the title with the first name: “Dr. Greg.” I am uncertain if this is prevalent with other healthcare professions.

I do find this practice curious. In my opinion, it is a thinly veiled attempt to be intimate and personal while concurrently giving no doubt regarding implied stature and authority. I refer to it as “casual superiority.” A level of arrogance and insecurity that simultaneously denigrates a legal standing that was hard earned.

The use of the title “Dr” is not consistent around the world. For example, in the UK, South Africa and Australia (and other countries whose cultures are closely linked to the UK), the title Dr is generally used both for those who hold doctoral degrees and for registered medical practitioners. A significant exception is surgeons in these countries as they do not use the title of Dr, but rather use the title of Mr, Mrs, or Ms. The exception being if the practitioner has furthered their education to university doctoral level or has been ennobled, knighted, or appointed a dame or baron. In these countries, the tile of Mr and Dr are equal in social stature.

It is curious to those of us on this side of the pond that professionals in other jurisdictions do not always welcome the title of Dr. For example, although dentists in the U.K. were permitted in 1995 to use the title Dr, many chose not to as it did not properly reflect their identity and training as surgeons.

Canada is a hybrid by virtue of our UK cultural roots and our geographic proximity to the United States. The title of Doctor has social status and therefore the use has both formal and informal utility. The National Institute of Health has chosen not to use the title in its postings, communication or research publications. It has adopted a policy in which all notation state the first and last name followed by their professional designation i.e. MD, DC, DO, Ph.D. due to their failed attempts to successfully address the various professional perspectives, cultures and legislation.

In some jurisdictions, there is territorial lobbying regarding title in marketing and advertising. There is a desire to only allow medical practitioners to use the title of Dr without a specific educational reference. It appears transparent that there is intent to further enshrine the title as being the singular purview of the medical community. It is curious that those who hold University Doctorates, considering the relatively recent usurping of their historical and proper entitlement, didn’t pursue this initiative. It is apparent that the medical profession has established that there is strong cultural authority and social capital (including wealth) in the exclusivity of the title and it is likely to increase in its intensity. There are now competing professions that are altering their de-gree designation i.e. Doctor of Physical Therapy as a professional first degree (bachelor level without dissertation), as well as Nurse Practitioners who attain Doctoral levels of education. It appears that the focus (attack) on my profession may gain some relief with the opening of another “front.”

As healthcare delivery and education are now experiencing amorphous boundaries, with over 30 per cent of all practitioners in North America being trained internationally, the educational professional designation will have less authority than the comprehensiveness of the education itself. Whether chiropractic or medicine, with international standards we will ultimately receive the re-spect of the patient. High standards in practice, education and research (consistent with the mission of the WFC) will ultimately grant us the cultural authority that a title can never bestow.

Dr. Greg Stewart is the director of the Manitoba Chiropractors Association. He graduated as a doctor of chiropractic from the Canadian Memorial Chiropractic College in 1986 and has had a full time private practice in Winnipeg since.
Print this page